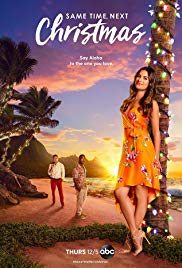 Movie Will Be Rebroadcast on ABC on Monday, Dec. 23, and on Freeform as Part of Its ’25 Days of Christmas’

ABC embraces the season with the upcoming original holiday movie “Same Time, Next Christmas,” which premieres on Thursday, Dec. 5, at 9:00-11:00 p.m. EST. The soon-to-be fan-favorite holiday film will also rebroadcast on ABC on Monday, Dec. 23, at 8:00-10:00 p.m. EST, as well as on Freeform as part of their “25 Days of Christmas” programming. You can also watch the movie via streaming on ABC.com, the ABC app and Hulu.

In “Same Time, Next Christmas,” Olivia Anderson (played by Lea Michele) is a successful young woman who met her childhood sweetheart during her family’s annual Christmas visit to Hawaii. After being separated by distance and years, the two reunite at the same Hawaiian resort years later, and the old chemistry between them flares up anew—but circumstances conspire to keep them apart.

Freeform Studios produces bold original programming that connects with audiences to move the cultural conversation a little forward. Their authentic, groundbreaking original series include “Good Trouble,” “Siren,” and “Motherland: Fort Salem,” as well as original movies including “Life-Size 2” and the upcoming “Ghosting: The Spirit of Christmas” and “Same Time, Next Christmas.”