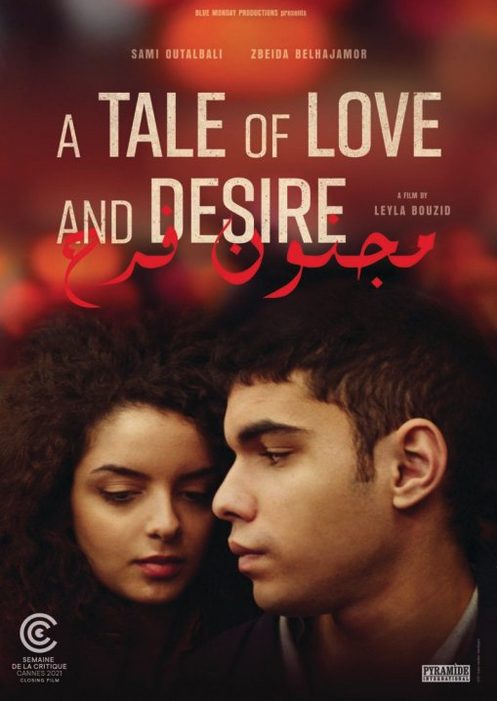 Los Angeles, CA (The Hollywood Times) 11/9/21 – One interesting film that screened recently at the COLCOA French Film Festival in West Hollywood is Leyla Bouzid’s A Tale of Love and Desire (Une Histoire d’Amour & de Désir, 2021). Leyla Bouzid’s assured, introspective second feature film is indeed brimming with both love and desire. This soft-spoken coming-of-age story tells the tale of Ahmed, a highly-conflicted French-Algerian student from the projects, and Farah, a free-spirited, sensual young woman from Tunisia. Enrolled in the same Arabic poetry class at the Sorbonne, the attraction between them is immediate. But Ahmed is torn –almost paralyzed – between his traditional ideal of a “pure love” and the eroticism that both Farah and Arabic poetry have awakened in him. As their literature professor says on the first day of class, “Desire, desire, and yet more desire. Is that not what literature is all about?”

Ahmed (Sami Outalbali) is quite reserved in contrast to the lively, magnetic Farah (Zbeida Belhajamor), a Tunisian student whom Ahmed first sees in his Arabic poetry class. The chemistry between the pair is palpable from the very beginning, and the film wastes little time in establishing them as lovers – physical ones, at that. Therein lies the central tension of “Une Histoire,” and the one that most interested writer-director Bouzid: Ahmed’s relationship to sex is a complicated one, repressed by internalized misconceptions of purity and respect. Farah, on the other hand, acts as the foil to Ahmed, providing a fresh and unrestricted look at physical desire not as a shameful act but as a very manifestation of the love Ahmed tries so desperately to keep sacred, often at his own expense.

Throughout the film, Bouzid expertly teases out this tension in Ahmed and Farah’s relationship, creating a high-strung, slow burn of an exploration into the complex spaces between sex and love, between divinity and desire. In one of the best moments of the film, Bouzid lays bare all these intersections in a single scene. While presenting the Arab story of Layla and Majnun – in which the poet Majnun, while completely enamored with Layla, refuses to add a physical dimension to their relationship – Ahmed claims that it’s because to do so would be to ruin her divinity and thus go against his all-consuming love for her, no doubt a reflection of his own views, distilled into one single explanation.

Similarly compelling is Bouzid’s treatment of the cultural and situational factors that play into Farah and Ahmed’s relationship. Ahmed, as the son of immigrants who maintains strong ties to some of his culture but not others –for example, he subscribes to culturally-relevant patriarchal standards of purity, but can’t speak or read Arabic – is often depicted as torn between the two worlds. Unlike Farah, who is secure in her identity as an Arab person, he is at first bound tightly to beliefs that even his own family members don’t hold. Instead, he is often found at odd ideological ends when it comes to his relationship with Farah as he pursues what he thinks is the “perfect Arab life.”

He and Farah represent different parts of the Arab diaspora. Curiosity surrounding the other’s experience becomes one of the more interesting threads in their relationship. Ahmed, born in France, lives in estate housing in the Parisian suburbs and works part time for a moving company owned by his conservative cousin, Karim (Bellamine Abdelmalek). His shifts entail lugging heavy boxes across Paris and fending off jabs from his friend Saidou (Diong-Kéba Tacu), who hides his lack of sexual experience by teasing others.

Within his community, Ahmed is seen as the most likely to do something different. His friends and his father project their dreams onto him – he will be a teacher, they say, or a writer. The weight of their expectations, and the pressure of cultural traditionalism (no sex, no alcohol), prove too heavy to carry. His troubles at school only add to the burden. The rules of the university are indecipherable to him. The women are elusive. He knows nothing about Paris. He feels like he does not belong.

Farah, on the other hand, holds a less fraught relationship to her identity and her environment. Born and raised in Tunisia, she does not feel lost in the sea of students, or intimidated by the university setting. She lives liberally, open to exploration and eager to make the most of her short time in Paris. She wants Ahmed to show her around, to go dancing, to eat and drink with her friends.

Literature helps bridge the chasm of their identities. The biggest gift of A Tale of Love and Desire is its built-in reading list, revealed throughout Ahmed and Farah’s courtship. As they search for texts for their 12th-Century Arabic Literature class, the pair come across a table of Arabic poetry. The camera pans to a few of the titles – The Declension of Love Poetry in Arabic, The Perfumed Garden – before returning to the couple leafing through some copies. And that’s within the first 15 minutes. Over the course of the film, and the semester, their professor, Anne Morel (Aurélia Petit), encourages them to read and embrace this ravishing literature of the past and realize that so much literature is about “desire.”

Of course, literature is also about love, and Bouzid illustrates the relationship between literature and love in refreshing ways. Daydream and nightmare sequences – Farah’s hands unbuttoning Ahmed’s shirt and caressing his chest; an unknown figure stabbing Ahmed in the neck – intensify the film’s quiet eroticism and tension. The whole film, really, is about sex and what it means for love, connection, and intimacy. Through the re-examining of his relationship with sex through various moments of awakening, Ahmed not only finds himself in the process but better understands his relationship with his culture. family, friends, and, of course, Farah.