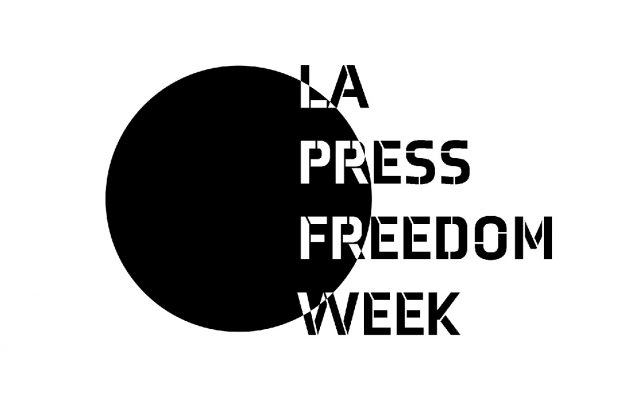 “A Small Trickle of Water Upon Stone”:  LA Press Freedom Week Panel at the Paley Center for Media

LA Press Freedom Week is a multi-day celebration of press freedom and the First Amendment that will engage the public and journalist community in and around Los Angeles.  LAPFW is co-sponsored by the Hollywood Foreign Press Association and the Los Angeles Times, in collaboration with Committee to Protect Journalists, International Consortium of Investigative Journalists, and the Reporters Committee for Freedom of the Press.

This reporter was pleased to attend the first event concerned with press freedom and elections in this inaugural series on the evening of Monday, September 16th, 2019 at the Paley Center for Media located at 465 N. Beverly Drive in Beverly Hills.  The evening started at 6 p.m. with a sumptuous rooftop reception (sushi stacks, anyone?) where attendees could mingle before seating themselves in the John H. Mitchell Theater at 7:30 p.m. for the panel.

There was general agreement that today’s truth-tellers need to join forces and collaborate in a global environment that is increasingly hostile to the free press.  “We need to push back aggressively!  This is not just a step back for journalists, but also for democracy!” insisted Maria Ressa (Philippines).  “We are facing an existential moment for our profession.”

Citizen confidence can be undermined from the bottom up by a “death by a thousand cuts,” said Ressa.  This makes it easier for the powers that be to overwhelm people with government propaganda from the top down as is seen with the KGB in Russia.

Women journalists tend to be harassed much more than the men in their profession.  Maria Ressa said that you just needed to keep your objectives in mind and remember that “all life is suffering” according to the Buddhists.  This helps to put the challenges into perspective.

Blanka Zöldi (Hungary) said that you needed to “bulletproof” the news to keep it true.  Terry Tang alluded to the “soft power” of press freedom.  The Internet itself can get cut off during so-called “democratic” elections around the world.

But Terry Tang assured the audience that most American voters had not been convinced by misinformation during the 2016 Presidential election.

Of course the “information ecosystem”, as Maria Ressa called it, has fundamentally changed because of social media.  Not all news is “good” (=accurate) news.  Kathleen Carroll observed that the business model for news services had also changed.

So what should we as citizens do under such difficult circumstances while the free press is under attack?  Perhaps we could divert some of the funds we spend on television, cable, music, and other media services to news agencies for a change.

We could also think critically about where our information is coming from.  Who is disseminating it, and for what purpose?  Mainly, we cannot take freedom of the press for granted any more wherever we might live.

“The food we feed communities is journalism!” exclaimed Maria Ressa.  The vital role played by a free press in a democratic society simply cannot be overestimated.

LA Press Freedom Week will take place from September 16-20.  For more information on the remaining events, please follow this link.