(Silver Spring, MD) – The scene is set, 1990s Charlotte: a city divided by racial tension, rampant gang violence and a crack epidemic that brought the murder count to new heights. But, beneath the surface lurked an even greater threat.

A monster by the name of Henry Louis Wallace was stalking his prey and murdering at will: his target – ten young African American women. For the first time ever, Investigation Discovery (ID), America’s leading destination for true-crime programming, reveals the story of ‘Bad’ Henry Louis Wallace, one of the country’s most notorious serial killers.

Featuring never-before-heard interrogation tapes and tales of devastation from those left behind, BAD HENRY is the story of how Detective Garry McFadden, the only African American on the homicide squad at the time, and his determined team at the Charlotte-Mecklenburg police department apprehended this diabolical killer.

BAD HENRY will premiere on Investigation Discovery with a two-hour special on Tuesday, July 24 at 9PM ET/PT. 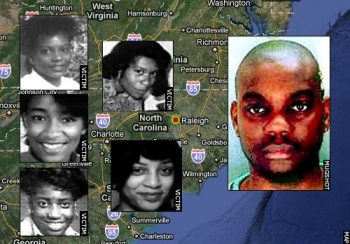 “The complete story of Henry Louis Wallace and the panic he unleashed in the city of Charlotte has never been told on television before,” says Henry Schleiff Group President of Investigation Discovery, Travel Channel, Destination America and American Heroes Channel. “’Bad Henry’ showcases the fearless tenacity of Garry McFadden and his team in their efforts to capture this killer, providing justice, and most importantly, closure to the victims and their families.”

By 1994 widespread violence, drugs and murder reached pandemic levels in the city of Charlotte. The city was caught in the grips of the crack epidemic, and homicides were on the rise with no end in sight. An overwhelmed Charlotte-Mecklenburg police department, with only nine homicide detectives on the force, faced an insurmountable workload and not enough hours in the day to solve these cases.

But, eventually, a startling pattern emerged. Young, African American women were being found raped and strangled to death across the city. The crime scenes were different; the victims had no apparent relation; and the deaths were scattered both in time and location; but, could there be a connection?

Enter former detective Garry McFadden and the steadfast homicide team of Charlotte- Mecklenburg county. As more victims were found and the clues became scarce, he and the team would not rest until the murderer was found. With one partial print and a grainy photograph, officers were able connect the dots and apprehend Henry Louis Wallace in association with the murders. For the first time ever, viewers will hear the actual interrogation footage of this ruthless killer, who calmly recounted the horrific murders of his victims.

Wallace describes to detectives in vivid detail the ‘hows’ and ‘whys’ of his murder spree; claiming he would often visit victims’ families, sometimes at their funerals, to offer condolences and support. Most importantly, BAD HENRY connects with the family members of the victims who candidly reveal the emotional turmoil they had to endure during Wallace’s two-year reign of terror. The relief they gained when they knew the killer had been captured, and justice served, not only provided closure to those involved, but to a city that has never been the same since.

Garry L. McFadden, President and Principal Owner of McFadden Solutions LLC, brings a wealth of investigative experience and knowledge to the consulting firm of Mac-So. Garry’s distinguished public service accomplishments with the Charlotte-Mecklenburg Police Department (CMPD), have given him capital experience in the investigative field. As a 30-year veteran with “CMPD”, he has carried out a wide array of assignments involving homicide, executive protection, domestic violence seminars, and handling sensitive administrative investigations. McFadden is highly regarded by other detectives, nationally, and is well respected in the legal community for his strong ethics, integrity, and honesty while addressing diverse audiences during problematic investigations. He was featured in Investigation Discovery’s hit show, I AM HOMICIDE which is currently featured on IDGO.  McFadden was recently elected Sherriff of Charlotte-Mecklenburg County.

Founded in 2014 by Geno McDermott, BLACKFIN has quickly become an industry leader in premium nonfiction. In November 2017, DISCOVERY premiered BLACKFIN’s newest hit series, FINDING ESCOBAR’S MILLIONS, to strong ratings and critical acclaim. Last year also saw BLACKFIN enter the world of feature film production, including the documentary MY PERFECT WORLD: THE AARON HERNANDEZ STORY, featuring an unprecedented look at the Aaron Hernandez saga and exclusive access to Hernandez’s family.   In 2018, BLACKFIN premiered HOMICIDE CITY on INVESTIGATION DISCOVERY, and has additional series in production with NETFLIX, HISTORY, INVESTIGATION DISCOVERY, NAT GEO and more, and projects in development with CNN, AMC, PARAMOUNT and many other networks. BLACKFIN is the polar opposite of normality. All projects are approached with the mindset that traditional production rules do not apply. It is in risking everything – and walking the fine line between unmatched success and failure – where the golden footage and storytelling lives. For BLACKFIN, the most compelling stories are served up raw with a dirty lens, some natural sunlight and drive to create a finished product that emerges as the first of its kind.

Investigation Discovery (ID) is the leading crime and justice network on television, delivering the highest-quality programming to approximately 85 million U.S. households. From harrowing crimes to in-depth investigations and heart-breaking mysteries behind these “real people, real stories”, the always revealing network challenges our understanding of culture, society and the human condition. The #1 network for women in all of cable, ID’s programming is available in both high definition (HD) and standard definition (SD), as well as anytime and anywhere through the network’s TV Everywhere offering, IDGo. For exclusive web content and bonus material, fans can follow ID on Twitter, Instagram and Facebook or check out the network’s true crime blog, CrimeFeed.

Investigation Discovery is part of Discovery, Inc. (Nasdaq: DISCA, DISCB, DISCK), a global leader in real life entertainment, serving a passionate audience of superfans around the world with content that inspires, informs and entertains. Available in 220 countries and territories and 50 languages, Discovery delivers over 8,000 hours of original programming each year and has category leadership across deeply loved content genres around the world. For additional information about ID, please visit InvestigationDiscovery.com