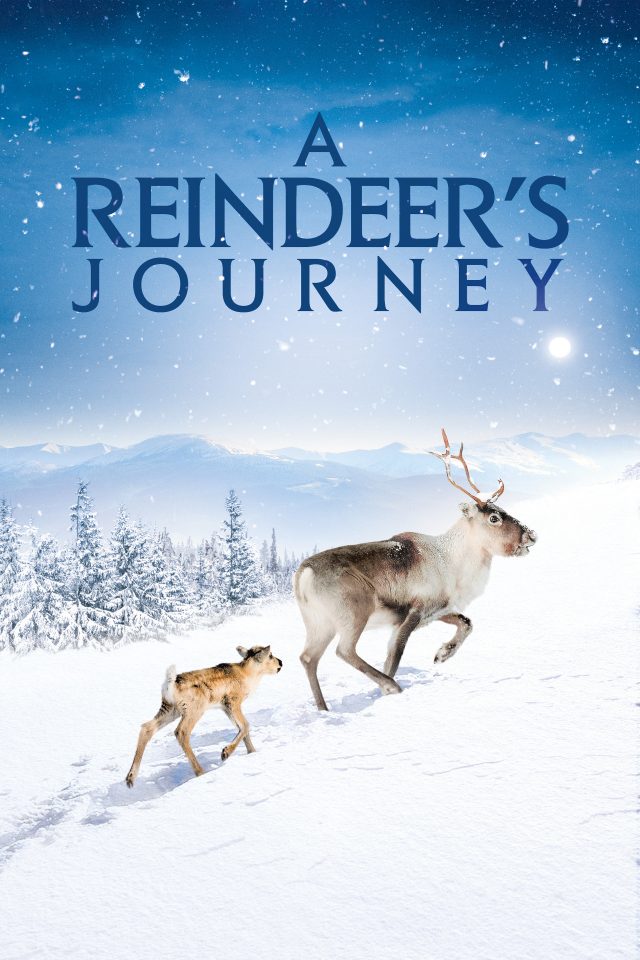 In Time for the Holidays | Dove Rated For All Ages

What a great documentary film for the upcoming holiday season.  We all grew up knowing about Santa Clause and his famous reindeer, so this film is great for all kids and adults to see how the reindeer got it start.  What a fascinating story of love between a first-time mother reindeer and her baby calf.  The photography will take your breath away.  You will see the world through the animal’s eyes and learn what they do. 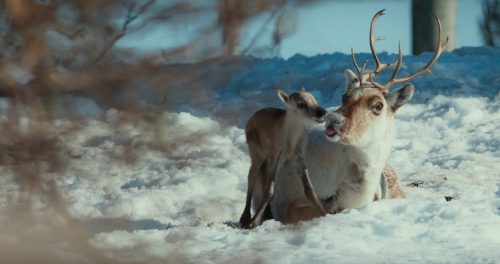 Meet Ailo, a newborn reindeer who embarks on an incredible odyssey with the help of his mother.

Vulnerable newborn reindeer Ailo must overcome the challenges that stand in the way of his first year of life in the stunning landscapes of Lapland.  Ailo and his mother’s journey is an uplifting story for the whole family.

From the moment the film begins, you are captivated by the stunning photography and then comes this amazing voice, the voice of the narrator, Mr. Donald Sutherland.  Mr. Sutherland’s voice keeps you clued to the screen in front of you. I can’t imagine another actor’s voice doing the narration for this movie. Peter Coyote does an amazing job in the Ken Burns documentaries, but Donald Sutherland gets an A+ in A Reindeer’s Journey. 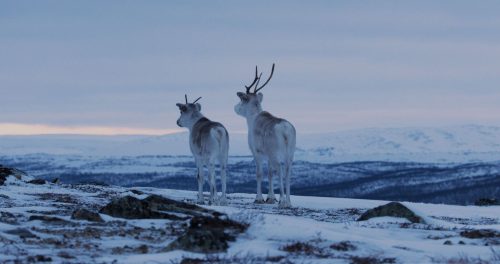 The film beautifully captures the winter wilderness of the Scandinavian mountains of northern Finland with sweeping vistas highlighting Lapland’s stunning terrain. The director and film crew endured sub-zero temperatures to follow a herd of reindeer as they embarked on their yearly trek of leaving their normal habitat during migration. The film touches on the negative effects of global warming and deforestation as wildlife is forced to adapt to the disruptive changes around them.

You will be sitting at the edge of your seat. You will laugh, you will cry and you will hold your breathe watching this amazing film.

A white polecat’s numerous attempts at stealing eggs from a tree will tickle everyone’s funny bone, you will want to rewatch it several times and laugh every time!

Though the film includes scenes of predators chasing their prey and catching them, the actual kill is not shown so it won’t frighten young ones, but it may sadden them.

On Demand and Digital Release November 19. Put this date on the calendar so you don’t miss this documentary film.

WHAT PARENTS NEED TO KNOW

Parents need to know that A Reindeer’s Journey offers an engaging look into the natural world but doesn’t hold back from showing the harsh realities of the animal kingdom. The narration builds suspense and foreshadows potential harm to the wild reindeer herd, including the baby reindeer at the heart of the story, which could cause younger viewers angst. Animals die, but the actual killing or moment of death is never shown. There’s also some frank discussion of male reindeer competing for “the favors” of the females. As a viewing experience for the whole family, the potential for learning about and appreciating the natural world outweighs the scarier or sadder moments, and the young reindeer and his mother emerge unharmed.

Every Day is a New Adventure

Screen Media Ventures, LLC, a Chicken Soup for the Soul Entertainment, Inc. (Nasdaq: CSSE) company, acquires the rights to high quality, independent television series and feature films for the US and Canada. With a library of over 1,500 television series and motion pictures, Screen Media Ventures is one of the largest independent suppliers of high-quality tv series and motion pictures to U.S. and international broadcast markets, cable networks, home video outlets and new media venues. For more information, visit: www.screenmedia.net.