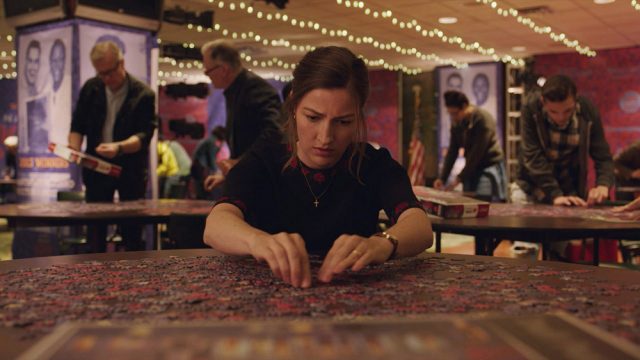 Los Angeles, CA (The Hollywood Times) 7/29/18 – When we meet Agnes, she is waiting on the guests at her own birthday party like a listless servant. If it weren’t for one iPhone, this suburban blue-collar household could just as easily fit into 1956. Your life would have to be painfully circumscribed to find jigsaw puzzles an exciting, liberating new discovery. Hers is, and she does. Through the simple – but to her, wildly rebellious – act of taking a train into Manhattan to buy another puzzle, Agnes begins to crack open this safe, boring life. 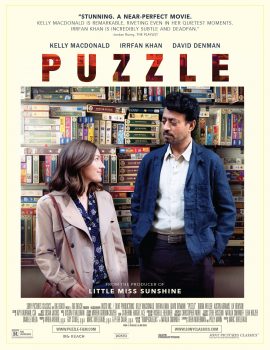 Puzzle is a sweet, if sometimes slow, sort-of-romance based on the 2009 Argentinian festival favorite Rompecabezas (literally Brainteasers). Director Marc Turtletaub and writer Oren Moverman are both best known as movie producers, and that may be why their work tends toward the linear and methodical. But the performances – Kelly Macdonald and David Denman as the oh-so-traditional married couple and Irrfan Khan as the worldly spanner in the works – are quietly affecting, three-dimensional and very human. The trajectory of their relationships are, in the end, not so predictable.

Macdonald (Boardwalk Empire, Gosford Park) both reveals and awakens the inner strength in Agnes. For the first time in her life, she believes herself to be really good at something… and finds someone who believes in her. David Denman (Pam’s first fiancé from The Office) keeps husband Louie from being a tyrant or even an asshole by showing us a man doing the best he can stuck in a life he was destined to inhabit. Irrfan Khan (Life of Pi, Slumdog Millionaire… if you’ve seen a mature Indian actor, it was probably him) is given the least to do, which is a shame because his character is the one with the most compelling backstory. Kudos also to Austin Abrams and, particularly, Bubba Weiler as the almost grown sons.

Invitees at the advance screening we attended were mostly women and mostly AARP members; it seemed as if the studio was hoping to coattail on the recent Book Club audience. This is not that kind of movie. It isn’t broad, it isn’t funny (although there are some smiles), it isn’t bright and bubbly and it isn’t a star vehicle. Its pleasures are far more subtle. If you go for quiet, character-driven drama, this is your jam.