Hollywood, CA (The Hollywood Times) 11/16/21 – Norwegian rockers a-ha were a one hit wonder almost 40 years ago, but that one hit is still so recognizable that you are probably singing it to yourself as we speak. “Take on me… take me on… I’ll be gone…“ and that’s when you gave up, because vocalist Morten Harket’s falsetto got so high you couldn’t hang. 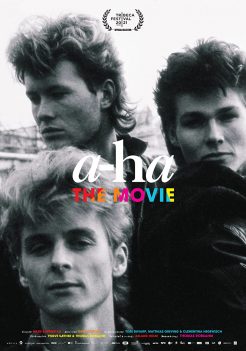 You’re welcome for the ear worm.

Of course, a-ha were far more than one-hit wonders outside of the US. They still hold records for 200,000 strong crowds in Rio. They have unit sales approaching 100 million worldwide. They’re national heroes in Norway, the only pop stars the country has ever produced. They’ve performed at the Nobel Prize ceremonies, written and performed a James Bond title song, and they still sell out arenas today. Which is why a film crew has been following them around for decades.

This is an intimate portrait of the trio as it is now, as well as a nostalgic trip back to those synth-poppy MTV days. Plenty of footage of the musicians as teenagers, plenty of heartfelt conversations with them at 60, looking back at lives of insane stardom. Be careful what you wish for, is the takeaway. They wanted to be stars, but now they think maybe they would rather have been musicians. 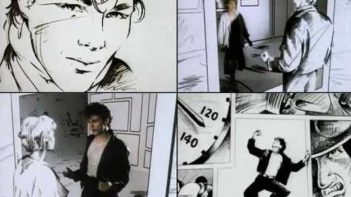 “It took me 25 years to figure it out,” says guitarist Pål Waaktaar.

The thing about a-ha is that, despite being together for 40 years — on and off, and on again, and off again, and back on — they don’t really seem to like one another very much. They just work well together as a band. They disagreed vehemently about musical decisions, business decisions….  and out of that conflict came some great songs. Keyboardist Magne Furuholmen says there’s no point in trying to write anything new, though, because “we’d just kill each other.”

Yet Pål and Mags have been playing together since they were 10 years old, stuck in a very old-fashioned Oslo with the ridiculous dream of moving to London and becoming famous. Childhood memories for which there is no footage are filled in with animation, which is becoming rather a trope in documentaries but works perfectly here because those black-and-white pencil sketches are a-ha’s signature.

Directors Thomas Robsahm and Aslaug Holm understand what it’s like to be Norwegian (many of the interviews are in Norwegian with English subtitles) and how overwhelming that onslaught of international fame must have been. Luckily, we get to spend much of the running time with these young vibrant, incredibly beautiful pop stars climbing the Hot 100, rather than the dour, aging Scandinavians they seem to have become.

I was actually one of the reporters invited to a meet-and-greet when Warner Brothers Records flew a-ha to Los Angeles for the first time. We went to dinner at, if memory serves, Spago. And every one of the music journalists at the table was a female, because Warner Brothers is not stupid and it knew the effect Morten has on women. Oh, he also has quite a good voice.

With the recent return of ABBA, it seems frothy Nordic pop is having a moment. a-ha deserves their piece of the spotlight.

Cinelounge, Hollywood’s premier (okay, only) outdoor art house theater, concluded its first annual FilmFest with this selection, after an evening of short films by mostly underrepresented filmmakers. Tickets were free, and one hopes more people will discover the festival, and the theater, in time..