A Grand Allegory:  Albert Camus’ THE STATE OF SIEGE Plays in LA!

Los Angeles, California (The Hollywood Times) 10/28/2017 – “My stated purpose was to make our murmuring stages resound with the loud cries that have the power to subdue or to free multitudes of men,” Camus said about this rarely staged work of genius. 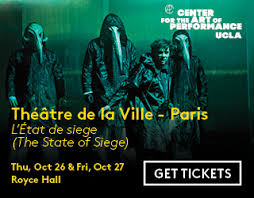 Right in time for the fright-filled Halloween season, THE STATE OF SIEGE reminds us that fear of death can actually make mortal life seem all the more precious.

THE STATE OF SIEGE (L’État de siège) is the fourth play by French absurdist philosopher and author Albert Camus (1913-1960), who won the 1957 Nobel Prize in Literature for profoundly influential ruminations on resistance, rebellion, and death just such as these.

THE STATE OF SIEGE is written in three acts presenting the arrival of plague to the supposedly fortified Spanish city of Cádiz and the subsequent creation of a totalitarian regime through the manipulation of fear.

The original sense of the title is closer to “state of emergency.”  The mythic play’s main antagonists are Nada, the nihilistic town drunkard, and La Peste–The Plague.

THE STATE OF SIEGE, which shares a common background with Camus’ gripping 1947 novel THE PLAGUE, was first staged in October 1948 by Jean-Louis Barrault.  The play has never made much of an impression upon critics, although Camus himself was quite pleased with it.  Nevertheless, THE STATE OF SIEGE has remained almost constantly in print in French and in a 1958 English translation by Stuart Gilbert.

This poetic and prescient 85-minute masterwork has been rediscovered by the internationally renowned
Parisian company Théâtre de la Ville, who staged it in all of its intensity sans intermissions on the evenings of Thursday, October 26th and Friday, October 27th at UCLA’s Center for the Art of Performance (CAP) at Royce Hall.

THE STATE OF SIEGE was directed by leading avant-garde French master Emmanuel Demarcy-Mota and performed in French with English supertitles.

The roles of Nada and La Peste were enacted by Philippe Demarle and Serge Maggiani.

When a comet appears in the sky over Cádiz, Nada warns the townspeople that it is an evil omen.  “If this is a sign, it must have meaning!”

The local government forbids everyone to say that they have even seen the comet.  “Nothing is happening, nothing will happen.”  But even this small city cannot be forced into silence and submission for long!

Comets have been viewed throughout human history as portents of horror, as in the brilliant 2016 Broadway musical “Natasha, Pierre and the Great Comet of 1812” starring Josh Groban that was based upon part of Russian author Leo Tolstoy’s (1828-1910) epic 1869 novel WAR AND PEACE.  The comet in THE STATE OF SIEGE appeared in all its fiery glory on screens set around the stage amidst eerie tableaus created by the cast arrayed in chic dark-hued costumes of the period.

Camus wrote in his 1951 book-length essay “The Rebel,” which traces both the metaphysical and historical development of revolutions in Western European societies, that his whole life was devoted to opposing the philosophy of nihilism while still delving deeply into individual freedom.  The townspeople’s rejection of oppression AND normative justice in THE STATE OF SIEGE follows from this line of thought.

In 1949, just one year after THE STATE OF SIEGE was launched, Camus founded the Group for International Liaisons to “denounce two ideologies found in both the USSR and the USA.”  Obviously, THE STATE OF SIEGE can be read as a dizzying modern metaphor during the age of Trump and Putin.

Irony of ironies, the USA has in fact been in a perpetual state of emergency ever since the 9/11 terrorist attacks on the World Trade Center in 2001.  Now many believe the terror is coming mainly from the top!

So what role can art play in the face of paranoia and great peril?  Can the human spirit still apprehend the beauty of life in the face of imminent annihilation?

These existential questions and many others are raised by THE STATE OF SIEGE.  Some hope may be found in the example of Diego and his lover Victoria, whose very name suggests triumph.  The classic Camus revolutionary seeks to fight for justice without abandoning transcendental values.

Albert Camus believed that a writer must be a servant to truth and always be ready to act even in the face of uncertainty and self-doubt.  The clarity with which he illuminated problems of human conscience still commands universal respect as his play THE STATE OF SIEGE is performed worldwide by and for concerned global citizens.

Resistance to evil is essential whatever the outcome!  Sometimes the attempt alone must satisfy us.

“I’m Not Single, I Have A Dog” Illustrates The Special Man-Canine Bond In Author’s Journey of Self-Discovery