WEST HOLLYWOOD, CA (The Hollywood Times) 9/20/18 — Four ambitious student films were chosen out of 300 submissions from 54 different schools to take home the Fine Cuts trophy on Wednesday night at the Directors Guild Theater. They included a quirky animated short about life in South Korea, a touching mini-drama about life in South Central LA, and an absorbing documentary about a female imam. Considering the quality of work from these film students, Hollywood pros better watch their backs. 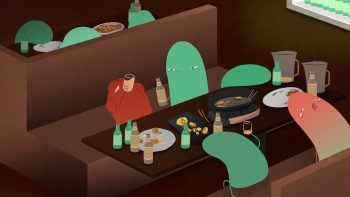 This is the 19th Annual FINE CUT film festival, which was founded by actor/screenwriter Jack Larson (best known as 1950’s Superman sidekick Jimmy Olsen) and is still funded by the Larson Foundation. KCET will air all 19 finalists weekly beginning Wednesday September 26, and viewers will have a chance to vote for a People’s Choice award — which may or may not duplicate what the judges panel decided. (I’ll be watching just to see the rest of the films. The four winners screened on Sept. 19 were an enticing appetizer.)

KCET VP of Communications Ariel Carpenter was pleased to note that 50% of the finalists were directed by a person of color, 56% were female, and 13% had LGBTQ themes. The winners turned out to be 100% people of color and 75% female; I have no information on their sexuality. The vast majority of the finalists attended either USC or Cal Arts, in case you were wondering where to send your talented child.

Here’s the complete list of the contenders that will air over the next four Wednesdays:

–Dumpling (California Institute of the Arts)

–If You Want Out (San Diego State University)

–On Time (University of Southern California)

–Raccoon and the Light (California Institute of the Arts)

–Where I was Born (California Institute of the Arts)

Actress Marianne Jean-Baptiste (Blindspot) and KCET host Pete Hammond were among the panel of judges and also presenters to young filmmakers who, for the first time in 19 seasons, only learned at the live event whether or not they had won. The students were surprisingly comfortable accepting a trophy at the podium, presumably having taken notes during Monday’s Emmy telecast.

Directors to watch included Kuwait-born Omar Al Dakheel, whose documentary about the clash of Islam and feminism cries out for a larger canvas, and Sri Lankan Aqsa Altaf, who managed to get entirely naturalistic performances from two actresses under the age of 10. This may have been their first event at the Directors Guild of America, but it probably won’t be their last.

Interview with Stella Flicker and Jerry Hoffmann About Film I AM