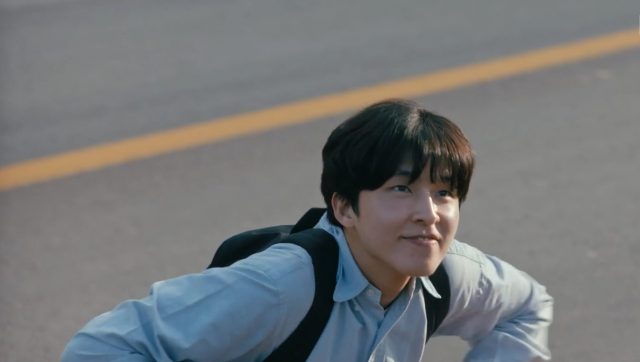 Los Angeles, CA (The Hollywood Times) 8/14/21 – This year’s Outfest 2021 has a dearth of films from Asia but there is one worth seeing in the festival and that Is Kuo-Young Park’s A Distance Place (South Korea, 2019). It has a gay relationship embedded in the story, but is of particular interest because it calls into question the importance of nuclear family in South Korean culture. A Distant Place is Kuo-Young Park’s first feature film, and within it, we find an appreciation of the Korean landscape (like Kim Ki-duk) but also Hang Seng-soo’s staging of family conversations. Kuo-Young Park’s A Distant Place is a pastoral tale about a man named Jin-Woo (played by Kang Gil-woo) who lives and works as a farmhand in a remote sheep ranch in the highlands of South Korea very near the border with North Korea.

Jin-Woo seems comfortable with his isolated life on Mr. Kim’s sheep ranch and looks after his adorable niece, Seol. Both have been taken in by the kindly Mr. Kim who employs him. Mr. Kim has a daughter who works on the ranch and looks after Mr. Kim’s aged mother who is showing signs of dementia. Together these five people constitute a kind of family – but certainly not the standard Korean ideal of the nuclear family. It is hit home at the start of the film by the lively Seol who insists on calling Jin-Woo “mommy” – when we know that he is actually her uncle and caretaker. Later this misunderstanding of gender roles will factor big in the story as it unfolds and we learn that Jin-Woo grew up without a mother and used to call his own father “mommy.”

The film is told mostly through the eyes of the little girl Seol, whose understanding of the world is limited to nature and the farm animals with whom she has daily contact. The pastoral illusion is soon broken by the arrival of Hyun-min (Khung Hong), an old friend of Jin-Woo from his days at the university in Seoul. We don’t get any backstory about their relationship, but quickly we discover that they have a passionate interest in each other and they begin sleeping together in Jin-Woo’s room. Hyun-min was a student of literature at the university and writes poetry, so after a few weeks of staying at the sheep ranch, he lands a job teaching older community members at the local Catholic church in the village of Hwa-cheon. The two men seem to be happy and no questions are asked about the nature of their relationship. Little Seol refers to the poet Hyun-min as “uncle” and seems quite comfortable with her invented family. The poet Hyun-min seems to want a relationship exclusively with Jin-Woo and, on a short camping trip to Soyangho Lake, he talks about “a distant place” where they could go and live together.

However, there is a dark past that suddenly erupts when Jin-Woo’s estranged sister Eun-yeong (Sang-hee Lee) shows up at the sheep ranch wanting custody of Seol.  Things become more problematic because little Seol does not see Eun-yeong as her real “mother.” As Mr. Kim points out “The sheep are just like us – selfish.” Seol is particularly attached to Mr. Kim’s mother, who Seol calls “Nana” or grandmother. Nana’s body is failing and she suffers from dementia, but in her moments of lucidity, she seems to understand all that is going on in this invented “family.”

We are never privy to the details of what happened to Jin-Woo’s sister back in Seol when she went through difficult times and gave birth to a daughter, or why Jin-Woo took it upon himself to leave Seol and find a remote place to live, work, and raise his little niece as if she were his own daughter. But Eun-yeong is determined to bring Seol back with her to the big city.

The rest of the film is set in motion by the disappearance of Nana into the woods, where she is found but, obviously, she is not is doing well, so it is no surprise that she soon afterwards dies. It is at the commemorative meal after her death and cremation that Eun-yeong, in her frustration, accuses Jin-woo of being gay and have a relationship with Hyun-min, saying it is so unnatural that little Seol should call him “mommy.” Jin-Woo responds: “She’s not your daughter.” This is the arc of the story and what happens next seems to be told mostly through the eyes of Seol. We find the little girl reading from Saint-Exupery’s The Little Prince: “One sees clearly only with the heart, / Anything essential is invisible to the eyes.” This moves Eun-yeong (her biological mother) in such a way that she begins to soften and perhaps she really does care about the daughter she long ago abandoned.

On the other hand, after the confrontation at the funeral dinner, Hyun-Min loses confidence in his ability to teach the poetry-writing class at the church and we hear him reading the poem he wrote to an almost empty room. His poem captures his own experience and the film’s deeper meaning:

“As we imagined the distant place, we grew uneasy.

Whether we were getting it right, that we would not know.

The harder we tried, we would not know

Whether we were right or wrong about our imagination.

We would only get close to the life

While we were imagining a distant place

That place near us was tripping every day

The place near us as far off in our imagination

Still we imagined this distant place

While we stood in a place near us

Only that could keep us from falling off the precipice.”

Director Kuo-Young Park aspires to be a poet of the cinema and, as a young director, shows great promise. Perhaps it is not a perfect film but it is a beautiful, delicate drama that probes the complex psyche of a solitary man.