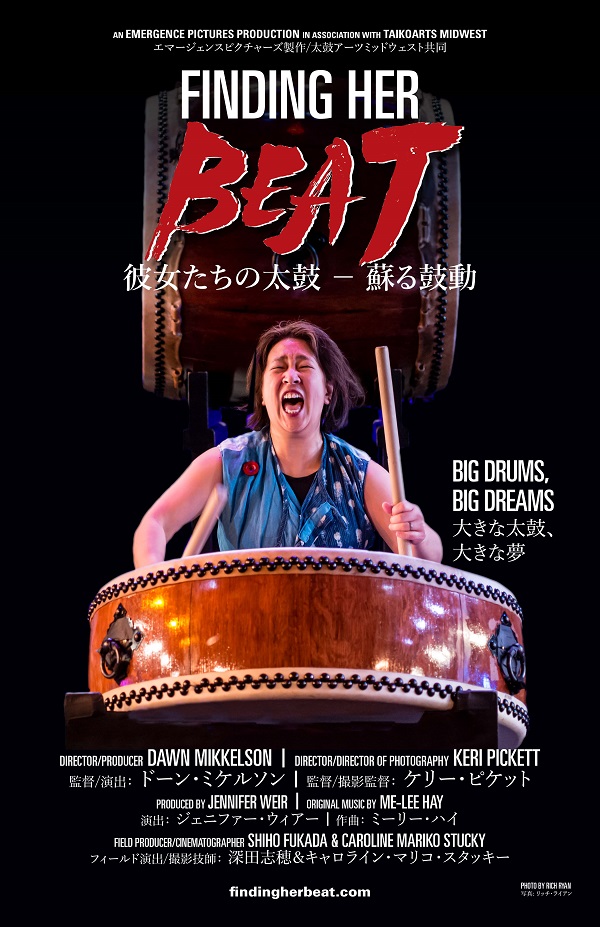 The upcoming world premiere of the moving documentary feature film, “Finding Her Beat,” as documentary selection for the key awards season film festival destination, Mill Valley Film Festival set for October 9th & 11th, 2022, bringing an incredible LIVE Taiko drumming performance with the film for festival audience, ahead of an already incredible confirmed line-up of top tier film festivals (yet to announce). “Finding Her Beat” was made by a predominantly female/nonbinary, largely Asian-American and LGBTQ filmmaking team and cast, when marginalized gendered and people of color are severely underrepresented in film.

It is well past the time to allow women to take center stage in the arts. For thousands of years women have been locked out of Taiko drumming. Not anymore, now thousands of groups perform throughout North America and worldwide. In the dead of a Minnesota winter right before the world shut down for a global pandemic, Asian drumming divas from around the world met to perform and smash gender roles and redefine power on their own terms. “Finding Her Beat” dives into the rhythms and struggles that lead to an electrifying historic performance that changes everything. As you know reviews from major film critics are a game changer for the release & awards trajectory of an independent film, so we greatly appreciate your review consideration.

The Hollywood Times had the pleasure to speak with directors Dawn Mikkelson and Keri Pickett, who is also director of photography plus producer and Taiko drummer featured in this documentary Jennifer Weir. So get out those earbuds or headphones and enjoy the conversation:

Through the perspective of the five main artists, “Finding Her Beat” explores the individual themes of cultural and racial identity, the challenges professional marginalized gender artists face, the artist’s passion for a subculture that was designed to keep them on the outside, and the burgeoning hope that this historic event marks the beginning of a new era of taiko – for everyone. Told both verbally and nonverbally, in silence and thundering percussion, the film organically unfolds in the lived moments of these artists. By providing a character-driven format, not only is the subject matter fresh to the majority of audiences, but it creates a challenge and narrative tension for Japanese artists whose traditional culture stresses the importance of the separation between private and public lives. “Finding Her Beat” artists opened their hearts to us, and we had an intense and intimate experience followed by a massive public experience – the last before COVID-19 changed the world of performing arts. This is an important story of women paving their own road by banging their own drum.

The journey of “Finding Her Beat” reveals a collective dedication for these Taiko drummers to be recognized in their field…they are trying to right a wrong, as women have not been allowed their place on the taiko stage. This film follows the journey of five women bringing the art form into the current reality and bringing other women center stage with them. Struggling through personality clashes, illness and the clock, we see how much one person can make a difference as Jennifer takes the dream and plants it, waters it and it flourishes into one of the most inspirational concerts ever witnessed, let alone filmed.

In the midst of a frozen Minnesota winter, a Japanese drum master and Korean adoptee from North Dakota join forces to assemble the world’s best Taiko drummers in a bold effort to claim a cultural spotlight that has historically been reserved only for men. Their rhythm revolution includes rock stars from the world of Taiko: Tiffany Tamaribuchi, Kaoly Asano, Chieko Kojima, Megan Chao-Smith, and Jennifer Weir. Through grueling rehearsals, Jennifer weaves together their disparate voices and styles. Vulnerability, pain, and joys are shared—and we quickly see the bonds of friendship form as these talented women navigate their way through differences in culture, age, language, and performing styles. As the clock ticks toward their first performance, it becomes clear that their story has become much larger than Taiko.