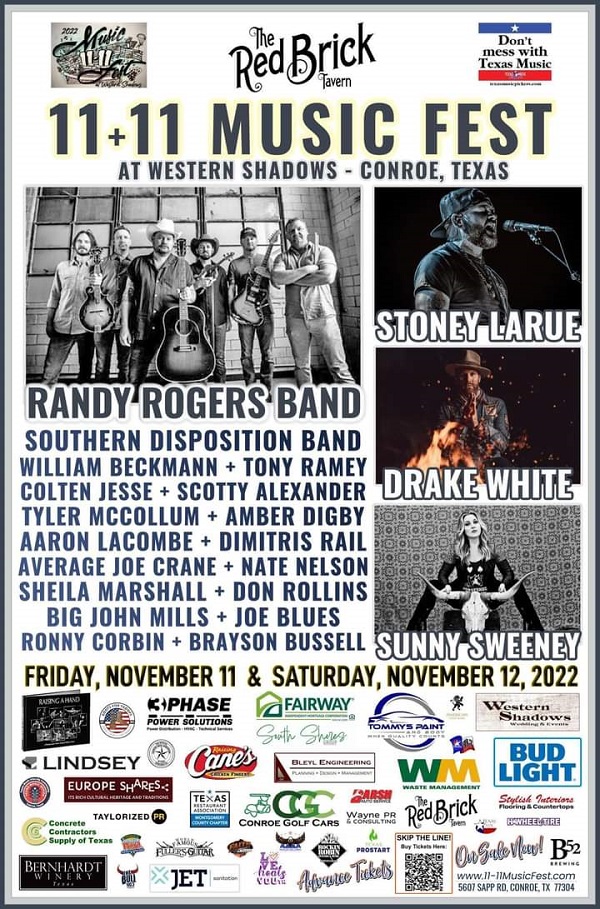 Conroe, Texas (The Hollywood Times) 11/20/2022 – “My favorite thing is connecting with an audience at a live show. The goals to let them forget about their problems for a little while, by singing about mine.” Aaron Lacombe told The Hollywood Times at the festival.

Debbie Glenn, creator of the first 11/11 music festival is also the lead singer for Southern Disposition band which is a pinch of Country, smidgen of Southern Rock, a dash of Blues and a pound of fun. Her band includes some seasoned musicians Billy Hillman, Michael Holleman and Scott Nutter.

Debbie is the owner of Red Brick Tavern in Conroe, Texas with a stage for artists to perform their music. This is a way to help Independent Artists further their careers.

The Festival was held at Western Shadows just outside city limits of Conroe with 2 stages which Southern Disposition, Randy Rogers Band, Stoney LaRue, Drake White and Tyler McCollum were a few that performed.  Acoustic Artists such as Aaron Lacombe played their original songs on a back stage surrounded by beautiful trees.

The Hollywood Times had the opportunity to speak with Aaron La Combe at the festival.

THT: How long have you been playing music?

Aaron: As a teen in the 80s I actually started singing in a Rock Band. Then in the restaurant business for a few years. Now decided to follow my dream as a storyteller Country artist.

THT: How did you meet Debbie Glenn?

THT: How many shows did you perform this last year?

Aaron: 110 shows in 2022. Plan on fewer shows in 2023 with more quality and opening for some great artists! I would love to perform in Oklahoma and Florida.

THT: Do you have a song on the radio at this time?

Aaron:  “Dream Along With Me” one of my favorite songs I have written.

THT: Where do people find your music?

Even though most are Independent Artists they have exceptional talent and amazing originals songs which some songs have been on tv series or movies like Drake White’s song “Happy Hour” on Yellowstone co-written by Hayes Carl.

There were several food trucks and a tent with Amazing Authors Jon Armour “Branded” based on a true story of the most notorious cattle rustler of our time.

Stephen Scott “The Relationship” Alise Cortez “Passionately Striving” and myself Patty McCall “CaliOkie” I felt so lucky to be part of such amazing Authors and trading books.

A real connection with a fantastic lady.  Mary Minter Director of CMA of Texas was the first customer to purchase my CaliOkie book at the festival. The tents and tables had curious festival goers intrigued by the many fantastic Authors. I was thrilled to meet each one of them and hear their stories.