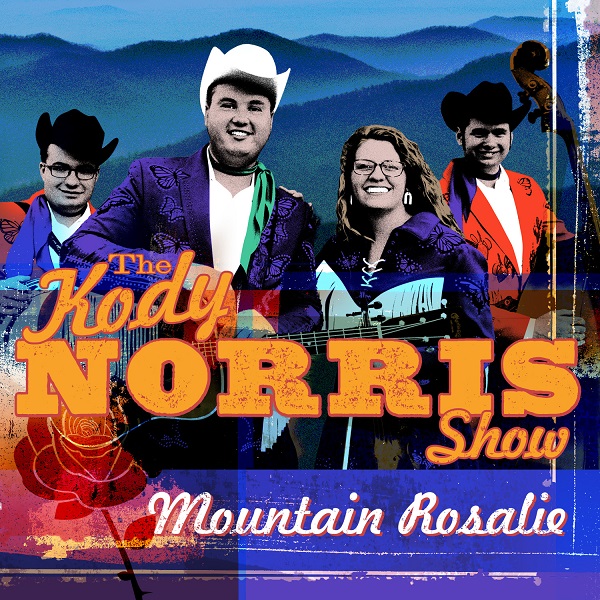 Los Angeles, California (The Hollywood Times) 09/20/2022 – “I just want everyone that comes to our shows, to have a good time and have those memories for a lifetime.” Kody Norris said.

With the release of their new song Mountain Rosalie, The Kody Norris Show are continuing on the path of bringing Bluegrass Music to both core fans of the genre and new audiences. They are a youthful voice of Bluegrass to music fans who tell them “I don’t like Bluegrass Music but I like you!”, and insiders who have awarded them multiple IBMA & SPBGMA Nominations and wins in 2022 for Entertainer of the Year and Fiddler of the Year for Mary Rachel Nalley-Norris.

Produced by Darin Aldridge, Mountain Rosalie is part of a release plan for 2022-2023 aimed at connecting with existing audiences and engaging new fans through constant touring, media and marketing. They have toured 48 states, Canada and Mexico, playing music festivals of all genres.

Enjoy our conversation about everything Kody Norris:

The foursome is fronted by Norris on guitar and his fiddling “sweetie,” Mary Rachel Nalley-Norris, Josiah Tyree on banjo and Cousin Charlie Lowman on the bass!

“Being a long time Bluegrass music fan, I have to say this band is one to watch out for!  If you thought Bluegrass music wasn’t part of your playlist, think again.  Just give them a listen via their social media below and you will definitely change your mind.  The new single Mountain Rosalie is one that will get your body moving and wanting more of it. A true classic Bluegrass song” – Judy Shields, The Hollywood Times

Kody Norris – Growing up in the mountains of East Tennessee, and sharing a birthday with the great Earl Scruggs meant that destiny was written in the stars for Kody Norris, who founded his band, The Kody Norris Show, more than a decade ago.  Although he did not grow up in a musical family, Kody recalls a couple of great-uncles who owned instruments, including his Uncle Jack, who would tolerate the young Kody dragging a banjo around the house and “making a racket.” Kody has fond memories of riding around in Uncle Jack’s Chevy El Camino with the music of the Stanley Brothers playing on the 8-track.  A chance meeting with Campbell Mercer, executive producer of the Cumberland Highlander’s Show on the RFDTV network, led to several appearances on that show, and ultimately a 9-year stint playing guitar on the show.

Mary Rachel Nalley-Norris – Hailing from Bowling Green, KY, Mary Rachel Nalley is a seasoned musician and performer. Although fiddle is her primary instrument, Mary Rachel is known as a skilled multi-instrumentalist. She has played mandolin for The Kody Norris Show in previous years, and now fills the fulltime role as fiddler … and “sweetie,” since Kody’s onstage proposal.  Now married 3 years.  Mary Rachel started playing fiddle at local jams in her hometown of Bowling Green, KY. Recognizing their daughter’s serious interest in a bluegrass music career, parents Jimmy and Phyllis started a weekly bluegrass jam which allowed Mary Rachel to develop relationships with local, regional and nationally-touring artists.  Mary Rachel manages a successful musical instruction program in East Tennessee, where she now resides. In addition to managing one of the busiest touring bands on the acoustic music scene.

Josiah Tyree – Carthage, TN native Josiah Tyree, contributes the high lonesome tenor to the band, along with his skillful banjo playing. Josiah credits his dad and assistant pastor for introducing him to old-time, bluegrass and gospel singing. With roots firmly planted in his love for old-time music, Josiah quickly picked up traditional 3 finger style banjo picking. In 2013, he won his first clawhammer banjo contest at Hillbilly Days in LaFayette, TN. With a little healthy competition in his veins, he entered and won every contest around including; Uncle Dave Macon Days, Smithville Jamboree, Bluegrass on the Harpeth and Wilson County Fair.  Through his participation in competitions, Josiah picked up a few old-time dance techniques as well. He’s been known to throw a few high steps into performances of The Kody Norris Show. More than a few fans have been delighted to find themselves on the receiving end of an invitation to dance when Josiah takes the stage.

Cousin Charlie Lowman makes his professional bluegrass music debut as the bass player for The Kody Norris Show. Charlie  discovered an innate passion for music at the ripe age of 12 years old and quickly showed an aptitude for a variety of instruments. After a family trip to the Mountains of East Tenn. Charlie knew that’s what he wanted to do! So, he did! Starting with banjo, then quickly moving to the guitar, bass, mandolin and even fiddle; Charlies versatility quickly landed him many fill in stints with several notable bands such as; Tommy Brown and County Line Grass, Johnny Campbell and the Drifters, the Mark Hembree Band, Basement Bluegrass Band and even more recently starting his own band Charlie Lowman and Emory Gap.  Charlie keeps the Kody Norris Show in time and always in a smile! His contagious personality is radiant not only on the stage but off as well. Charlie now resides in Mountain City, TN.

About The Kody Norris Show:

The Kody Norris Show is continuing the path of bringing Bluegrass Music to both core fans of the genre and new audiences. They are a youthful voice in Bluegrass music, and insiders have awarded them multiple IBMA & SPBGMA Nominations and wins in 2022 for Entertainer of the Year and Fiddler of the ear for Mary Rachel Nalley-Norris. The Kody Norris Show’s album “All Suited Up” (2021) charted at #7 on the Billboard charts.

Their trademarked high energy style delivers an unrivaled live show experience. Rife with rhinestones, loaded with laughs, and a heaping helping of high-powered traditional music, The Kody Norris Show is truly one of a kind.