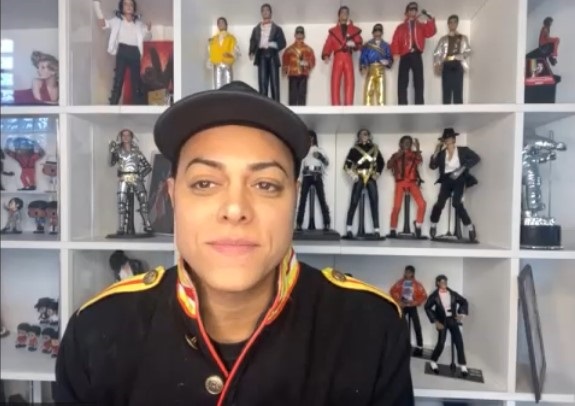 July 2nd in Los Angeles, CA at The Wiltern

Hollywood, California (The Hollywood Times) 07/02/2022 – “I look forward to coming to the United States to present our ‘Michael Lives Forever: A Tribute to Michael Jackson’ show,” Rodrigo Teaser told The Hollywood Times during an interview on Tuesday.

I am super excited to be invited to see Rodrigo’s tribute show on Saturday, July 2 at The Wiltern. You won’t want to miss this show. Click here to get your tickets.

Rodrigo joined us today all the way from Brazil to talk about his Michael Jackson Tribute show coming to the USA for the first time. Grab your earbuds/headphones and enjoy our conversation.  Click on “Watch on YouTube.”

Famed Michael Jackson impersonator Rodrigo Teaser brings his one of a kind Michael Jackson tribute show, Michael Lives Forever, to the U.S. for its first time this summer.  This string of US tour dates follows the success Michael Lives Forever has had as it has toured around the world in places like South America, Europe and Mexico being seen by over 500,000 fans to date. Rodrigo Teaser takes being a Michael Jackson impersonator very seriously, not only singing his songs and doing his dance moves, but being sure that each costume worn during a performance is meticulously replicated to be exactly what Michael had worn originally.

However, Rodrigo doesn’t just stop at dance moves, costumes and songs, he has gone above and beyond bringing on original members of Michael’s creative team to give fans a truly unique and first of its kind chance to experience that could only be replicated by the King of Pop himself. Specifically on these three tour dates Rodrigo will be bringing Michael’s longtime choreographer Lavelle Smith, Michael’s backup singer Kevin Dorsey, followed by guitarist Jennifer Batten who fans will recognize from years of playing with Michael at events like the Superbowl and more!

Having performed with Michael for years, it is a huge stamp of credibility that Michael’s longtime collaborators have chosen to hit the road with Rodrigo on the Michael Lives Forever Tour.  When asked about why she chose to work with Rodrigo, guitarist Jennifer Batten said, “He makes a presentation that Michael himself would be proud of. He takes every aspect of the show super seriously and expects the same from the crew and performers.” Similarly, backup singer Kevin Dorsey said, “Because Rodrigo exudes and takes so much pride in the way that he presents himself, as he pays homage to The King of Pop.” While chorographer Lavelle Smith says that when watching Michael Lives Forever, “You feel transported to each Michael Jackson era when you see Rodrigo perform all the hit songs.” When asked about the experience creating Michael Lives Forever, Rodrigo said, “I’m not an artist who discovered he could imitate Michael.  I’m a fan who, by imitating his idol, discovered that he could be an artist.  And I will be forever grateful to him for opening my eyes to his art.  I don’t want to take his place. Neither I nor anyone else can replace him. That’s why this show is more than a show, it’s a celebration.”

This tour will bring Michael Lives Forever to the US for its first time ever after having performed to sold out audiences around the globe. Not only is this the first time Michael Lives Forever will be performed in the U.S., but it will also be the first time that Lavelle Smith, Kevin Dorsey, and Jennifer Batten have performed together since  Michael’s passing in 2009. When asked about coming together with Jennifer and Lavelle, Kevin Dorsey said, “We’ve circled the globe together making history. I can’t think of another two that I would rather have my last dance with!”  Fittingly this special reunion and tour kicks off in New York City on June 25th on the 13 year anniversary of Michael’s passing.

Rodrigo Teaser first started imitating Michael Jackson at the age of 9 competing on local TV shows in Brazil. In 2005 Rodrigo was selected to be highlighted on Michael’s website as one of his top imitators and was asked to perform at a celebration party following his court case. He was then invited to New York City to perform at “30 Years of Magic” an event that highlighted imitators from Latin America. While back in Brazil Rodrigo was already starting to develop a name for himself as Michael Jackson impersonator sharing the start with some of the country’s top artists. Following Michael’s passing in 2009 Rodrigo had the idea to put together a mega tribute show. This wasn’t going to just be him performing the songs and doing the dance moves, Rodrigo wanted to go all out, to replicate Michael’s live show using a live band, dancers, costumes, special effects, scenic lifts, LED screen and more! Rodrigo even enlisted the help of Michael’s longtime choreographer Lavelle Smith, who came down to Brazil to help put the finishing touches on the Michael Lives Forever performance. In 2017 Michael Lives Forever was selected to perform at one of the world’s largest music festivals “Rock In Rio” where Rodrigo performed alongside artists like Justin Timberlake and Lady Gaga. In 2019 Michael Lives Forever made its European debut to a sold out crowd of over 15,000 people in the Czech Republic. Now Rodrigo is following up and bringing Michael Lives Forever to the U.S. in New York, NY (6/25), Orlando, FL(6/30) and Los Angeles, CA (7/2). Stay tuned to Michael Lives Forever’s social’s below for more updates on the US tour as well as future tour dates.