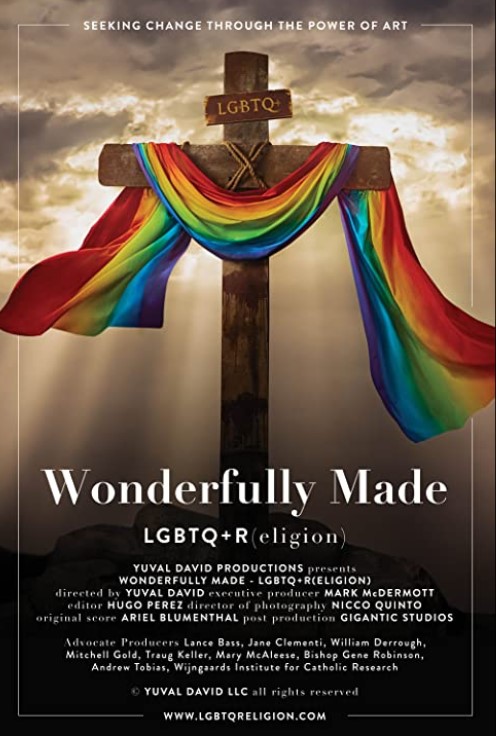 A world premiere is scheduled at acclaimed LGBTQ Film Festival Out On Film in Atlanta followed by a New York Premiere at Woodstock Film Festival this fall of the powerful LGBTQ documentary “Wonderfully Made — LGBTQ+R(eligion).”  The feature film directorial debut from Emmy®  winner Yuval David (“Madame Secretary,”  “What Would You Do?”), Executive Producer Mark McDermott (“Building A Bridge,” “Between the Shades”), and Advocate Producer Lance Bass (“The Boy Band Con: The Lou Pearlman Story,” “Kidnapped for Christ”).

Advertisement
“My First interview with the Hollywood Times was phenomenal. It’s not a lot of times when you get the chance to cover such subjects related to acceptance. I’m glad I got to experience such a groundbreaking film. My coverage of this film is dedicated with love to CMD.” – Jesus Olivares, The Hollywood Times

The Hollywood Times had the opportunity to speak with Yuval David and Mark McDermott about the film. Enjoy the conversation:

“Wonderfully Made — LGBTQ+R(eligion),” is an extraordinarily moving feature-length documentary that strikes at the root of anti-LGBTQ attitudes by exploring the challenges and aspirations of LGBTQ+ Catholics. The film focuses on the Catholic Church, as one of the largest religious organizations in the world with its anti-LGBTQ+ stance, has been a source of pain for so many of its followers. The film shines a penetrating light on the Churches ostracizing teaching, while remaining respectful of those of faith. It features interviews with leading advocates of LGBTQ+ Catholics, including a pioneering nun, two prominent priests (one of whom is openly gay), and a former U.S. Ambassador to the Vatican. The narrative of the film is shaped by the process of a fine art project creating unprecedented, photographic iconography depicting Jesus as a member/ally of the LGBTQ+ community, portrayed by multiple LGBTQ+ models of diverse ethnicities, genders, races, sexualities, and identities.

Award-winning and celebrated actor, host, filmmaker and advocate Yuval David puts his entire being into all he does. He engages through his unique creativity, powerful energy and captivating artistry that emanates from his passionate vitality, vulnerable soulfulness, quick wit, perceptive viewpoint, alluring enthusiasm, charming charisma, and genuine kindness.

On a mission to entertain, uplift, inspire, and empower, Yuval is a storyteller, approaching the narrative through his work as an actor, host and filmmaker.