By Patty McCall and Judy Shields

We had the opportunity to speak with Darren Taylor about his new movie “The Greatest Coach of all Time” and it was a great conversation.

This is a great time for the release of faith-based feature-length film The Greatest Coach of All Time. The movie co-stars Darren Taylor along with award-winning actor Dean Cain of Lois & Clark: The New Adventures of Superman fame along with his lead role in the movie God’s Not Dead. Other stars include R.V. Brown, Ron Ellis and Super Bowl champions Michael Clayton and Dexter Jackson.

Grab a cup of your favorite beverage, put on your earbuds or headphones and enjoy the video conversation:

A Premiere of this film was held at the Tampa Landmark Theater back on July 28, 2022 and our own Entertainment Reporter Patty McCall was there to cover it for us. 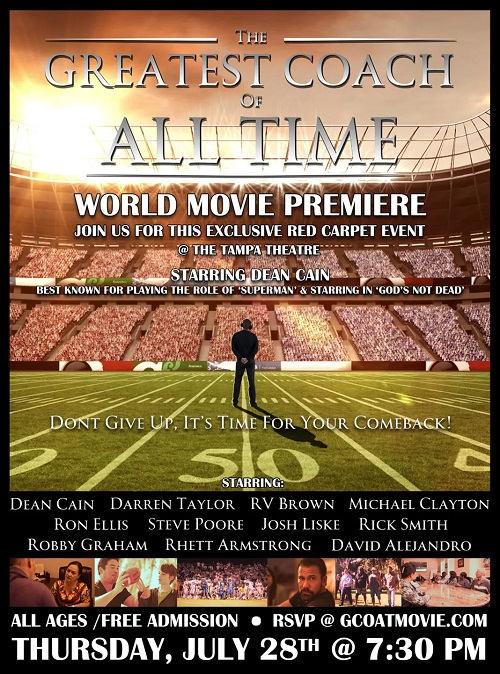 Here is what Patty had to say about that night.

Are you ready for your Comeback? Watching the movie “The Greatest Coach of All Time” you will have the mind set and strength to begin!

I was invited to the Premiere by Bill Walsh, seeing the poster, I immediately thought of Barry Switzer being a native of Oklahoma. Everyone I asked before had a different Coach they thought was the greatest.

After interviewing several actors in the movie, Darren Taylor, Steve Poore, Michael Clayton, RV Brown, Josh Liske, Brandon Rossell and watching the movie, it took a totally different direction of who the coach was.

The movie followed scenarios of lives crumbling, people down on their luck and how they made a comeback by throwing away their fear, being a believer and following the direction of the playback with scriptures from the Bible.  We can’t choose what happens to us or around us, but we can choose how we react.

Amazing faith base movie, relatable to all walks of life, young, old, Christian, or not. Your spirit will be filled with positivity after watching.

Dean Cain of Lois & Clark: The New Adventures of Superman fame starred along with Darren Taylor. Taylor, author of bestselling book “The Greatest Coach of all Time” was also writer, director, producer of the feature.  He is also a singer/songwriter who lived in Nashville before relocating to Florida and with several of his songs featured in the movie, including the movie theme song appropriately titled “The Greatest Coach of All Time.”

Iris Reyes, 1st AD and script supervisor was Darren’s firsthand lady. She has worked on many short films, TV commercial and Lifetime movie as script supervisor. Iris has been 1st AD on 2 other features.

Upcoming young actors to look forward to their careers would be Brandon Rossel and Lilly Rose Smith.

Lily Rose Smith and Miley Smith, who play sisters in the movie, are a part of a set of triplets in real life. Their sister Tierney Smith is also an actress.

The Premiere was held at the Tampa Landmark Theater which reminded me of watching premieres at the Chinese Theater on Hollywood Blvd. The night was sold out to 1100 seats. We all need a friend to talk to. Jesus has been my best friend since I was 8 years old. Every day he walks with me and talks to me.

Darren has scheduled another pre-screening of “The Greatest Coach of all Time” for Saturday, October 1st at Cornerstone Community Church in St. Pete, Florida. For more info go to www.cccstpete.com 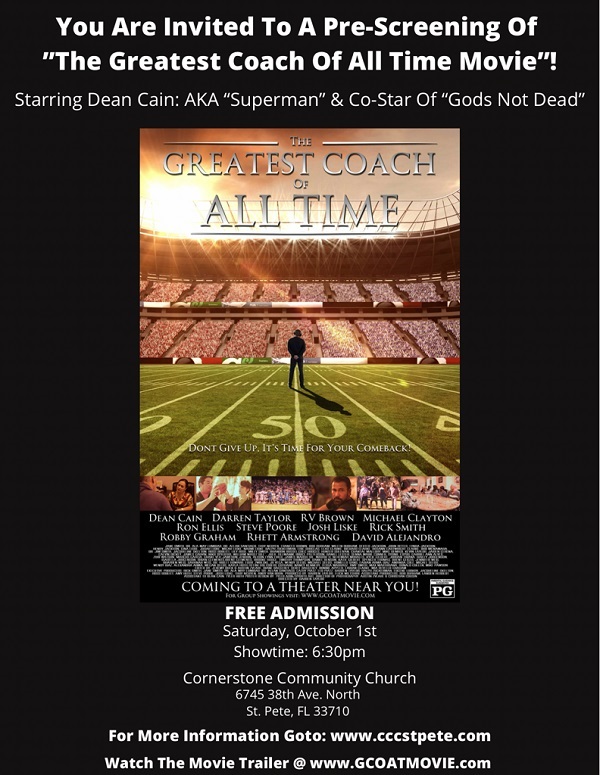 Darren Taylor is planning on showing his movie at churches around the country.  If you’d like to have a group movie screening of “The Greatest Coach Of All Time” at your church or event, fill out the form in the link HERE

About “The Greatest Coach of all Time” Book

You may have heard life referred to as a game. And in any game, you’re either winning or losing. But its never too late for your come from behind victory. I believe that you’re reading these words for a reason. So get your hope back and start dreaming again. Because victory is now within your reach.

Behind every star player is a great coach. Every great coach has a brilliant game plan and a written playbook. When the right plays are called, and the game plan is well executed, victory and championships are guaranteed. Are you ready to learn how, “The Greatest Coach Of All Time,” can coach you to one of the most amazing personal comebacks in history? If so, it’s time to get back on the field, and play the second half like the 2-minute warning! Lay it all on the line. Cuz it ain’t ever over at halftime!

Check out the movie trailer, music, music videos along with some of the videos to be introduced to his family!!