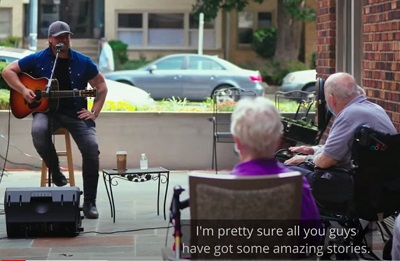 Rancho Cucamonga, California (The Hollywood Times) 03/23/2021 –  “There are so many amazing stories to be told by seniors in senior housing, we all should inspire to reach out.” Country Music singer/songwriter Billy Dawson told The Hollywood Times during a telephone conversation.

The First Episode of “Seniors & Songwriters” Premiered By Sounds Like Nashville

“This is truly a YouTube video that should be watched by everyone, no matter your age, race, religion or where you call home.  Please watch it, share it and repeat!

What an amazing concept Billy Dawson came up with.  There are so many seniors that sit in these facilities because they may not have families members or their families can not give them the care they need.  We should all strive, once the pandemic gives us the opportunity to do so, go and visit a local senior facility with a mask and precautions, and find a senior to strike up a conversation.  Become a reporter and as them questions about their lives and share their memories they are freely giving and even ask them for some advice about your life.  Get involved!” Judy Shields, The Hollywood Times

Please join me in my conversation with country singer/songwriter Billy Dawson:

BETHESDA, Md.  Country music singer-songwriter and best-selling children’s book author Billy Dawson has teamed up with Meridian Senior Living, headquartered in Bethesda, MD., to create the new series, ‘Seniors & Songwriters.’ This show brings songwriters to different Meridian Senior Living facilities across the country, where they play music and tell the stories behind their songs to appreciative senior citizens and the seniors get to share their life stories as well. The program does its best to interact with the community, offering friendship and more importantly, dignity. The first episode of the heartwarming series premiered by Sounds Like Nashville back on, February, 22 featuring Mr. Perkins, who is a 97-year-old American hero.

“I am so honored to be working with such an amazing group of people over at Meridian Senior Living and love getting to visit with their amazing residents. I have gone into assisted living facilities my whole life and have heard some of the most amazing stories from these kind folks,” says Dawson. “When some people walk into assisted living facilities they might just see older folks in wheelchairs sitting in the halls. When I walk in there I see heroes and young minds in older bodies that used to stand where I now stand, who have stories to tell. We have to get these stories of these seniors engraved into digital stone so that future generations may learn from them. I will never forget my family surrounding my Grandmother at an assisted living facility and when they started to sing old hymns it was as if her Alzheimer’s had disappeared for a few minutes. Music is powerful and these stories are powerful! There is a story behind every Senior and there are stories behind Songwriters and I’m so grateful to bring to you ‘Seniors & Songwriters’.”

“We at Meridian Senior Living are excited to work with Billy Dawson to capture some of the stories of those who live in our communities. There is so much unwritten history and wisdom and linking it with music will hopefully have an impact on our generations to come. I would also like to acknowledge Matt Cohn and Joey Rossetti at Hitfire Media and Steve Andrews for all of their hard work capturing this story,” expresses Kevin Carlin, Principal and Chief Sales Officer, Meridian Senior Living.

While celebrating Black History Month in February, Dawson highlighted some of the unique, fascinating stories and perspectives of Mr. Perkins. Perkins was among the brave African Americans to fight for and champion civil rights in America. He served 40 years in the armed forces and went on to become a professor of Biological Sciences at Howard University. Dawson also showcases Ben’s Chili Bowl in Washington D.C., which is a fixture in the city and was a safe place for those involved in the civil rights movement with Dr. Martin Luther King Jr.  Mr. Perkins frequented the establishment during this time period since there were so few places for the African American community to go out to eat. Mr. Perkins’ knowledge and experience as well as his history intertwine with this historical establishment and for the first time, the story is being told to the world. Dawson describes Mr. Perkins as a man who “didn’t only witness change, but was the change himself.”

The Texas-bred, Nashville-based country artist and guitar virtuoso also released a lyric video and concept music video for his song “UNITE” on Martin Luther King Jr. Day. The song’s theme of inspiration and unity sends out a message of reconciliation and togetherness. “UNITE” shines a light of hope into the darkness during a time which we all need it most.

WATCH or listen to “UNITE”:

About Billy Dawson:
Billy Dawson grew up in Sunray, a small West Texas town. An appropriate name for a man on the same mission. He now calls Nashville home, where he has a career as a country music singer/songwriter, author, and motivational speaker. Dawson’s travels have brought connections to super-producer and songwriter Rodney Clawson, country chart-topper Lee Brice and many others. 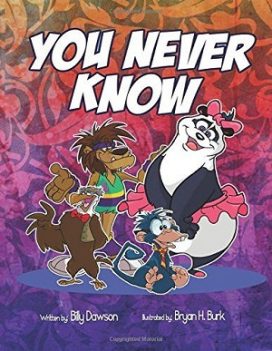 Dawson also penned an AMAZON best-selling illustrated children’s book on bullying, titled “You Never Know” in 2014. And as if that weren’t enough, he also supported various charities such as the Pat and Emmitt Smith Charities, Matthew McConaughey’s Just Keep Livin Foundation, Toby Keith’s Kids Korral, Muscular Dystrophy Association, the George Lopez Foundation, Homes for our Troops, Volunteers of America Colorado just to name a few. To keep up with all things Billy, visit www.billydawsonmusic.com.

Meridian Senior Living, privately owned and headquartered in Bethesda, Md., manages more than 85 senior living communities in 21 states across the U.S., and is one of the nation’s top 20 seniors housing operators. With all-encompassing services including operations management, sales and marketing, care services, and human resources, our dedicated Meridian corporate and regional teams partner with owners to a high-level of resident satisfaction while increasing profitability.