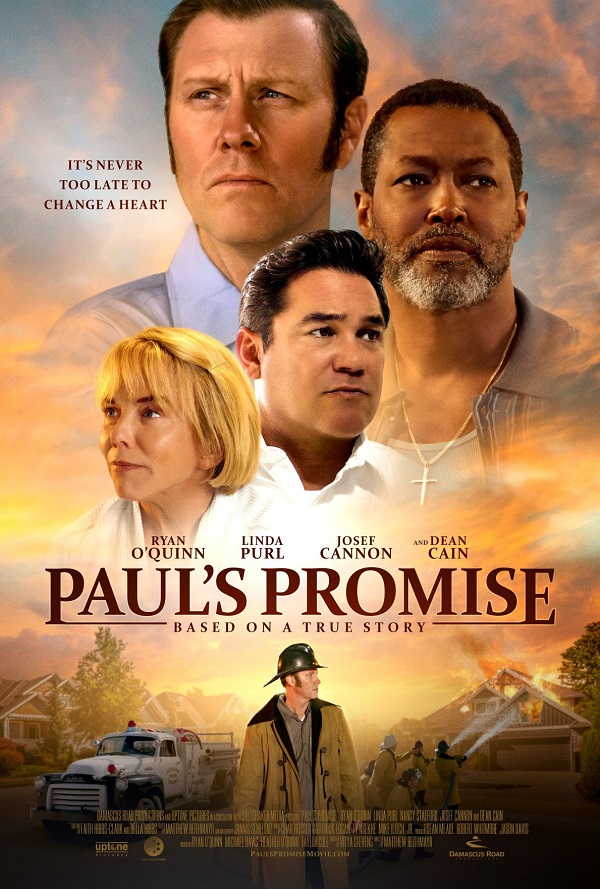 Los Angeles, California (The Hollywood Times) 10/20/2022 – “In my opinion, we need more family movies, more wholesome movies. I wanted to be able to have my grandmother next to me and my 10 year old son on the other side of me and be able to watch something together as a family.  This movie is excellent counter-programming and can be enjoyed by audiences of all ages and a real message of hope.” Actor Ryan O’Quinn told The Hollywood Times during a Zoom interview today.

The Hollywood Times had the great pleasure of speaking to actor Ryan O’Quinn about his new movie “Paul’s Promise.”  So get out those headsets or earbuds, a beverage of your choice and enjoy our conversation:

“During this time, in which we are facing as a nation, we need a movie like “Paul’s Promise.” So gather the entire family and go see this amazing movie tomorrow.  Ryan O’Quinn said all you have to do is go to the website and put in your zip code to find a theater near you, click HERE to just do that.  You can even purchase tickets on the website.  If you don’t see it playing near you, just click on the “Demand” tab and fill out a form to be able to bring the movie to your town.” Judy Shields, The Hollywood Times

AN INSPIRING BIOPIC OF HOPE, FAITH AND RACIAL RECONCILIATION PORTRAYS THE STORY OF PAUL HOLDERFIELD AND HIS IMPACT ON THE WORLD THROUGH HIS PERSONAL TRANSFORMATION

“Paul’s Promise” is the debut project to be released under the newly-announced Damascus Road multi-picture pact with film executive, producer and financier Mike Ilitch, Jr., who has committed to a slate of films, many already in the production and distribution process, with a broad forthcoming slate to also soon be announced.

“Inspiring audiences through entertainment has always been a goal for our companies,” said Ilitch. “This true story of one man’s journey of transformation that impacted generations fits perfectly with our brand and the stories we are sharing with the world.”

“It is truly a highlight of my career to bring this story to the big screen,” says O’Quinn. “One man’s decision to serve God and stand up to injustice continues to make a huge impact on his community to this day.”

The film chronicles Paul Holderfield, Sr.’s life, who was raised poor and knew what it was like to go to bed hungry and hear his mother pray at night for food for her children.

In the 1950’s, during the Little Rock Central High School crisis, Holderfield was a North Little Rock fireman and remembers turning his back on a Black man, hoping he would not recognize him, but he did. His childhood best friend Jimmy Lipkin approached Paul for a handshake, but Holderfield put his hands in his back pockets and refused to shake Lipkin’s hand.

​Later convicted by his actions, Holderfield told his wife Barbara that he would never again treat a human being that way. Ultimately, Holderfield started Friendly Chapel and F.L.A.M.E. (Feeding and Loving All Men Equally) to help others and spent the rest of his life giving back to anyone in need. As he put it: “We came into the neighborhood when they did not want us and stayed until they could not do without us.”

Fully dedicated to meeting people’s needs, Holderfield built an organization that has been serving others for 30+ years, meeting the nutritional (through a soup kitchen/food pantry) emotional, physical (clothing, shelter), spiritual and health needs of others 24/7, 365 days a year.

“‘Paul’s Promise’ shares the hope and healing of Holderfield’s life during a troubled time in our Nation’s history,” says Executive Producer Nick Logan. “His life’s work continues to this day through his family and his son, Paul Holderfield, Jr.”

About Saltshaker Media
SaltShaker Media develops, funds, and produces films that positively influence culture and bring positive entertainment options to everyone everywhere. They have been involved in films such as “Divided Hearts of America,” “Reagan,” and “This is the Year,” and are currently developing “The Joe Roth Story.”