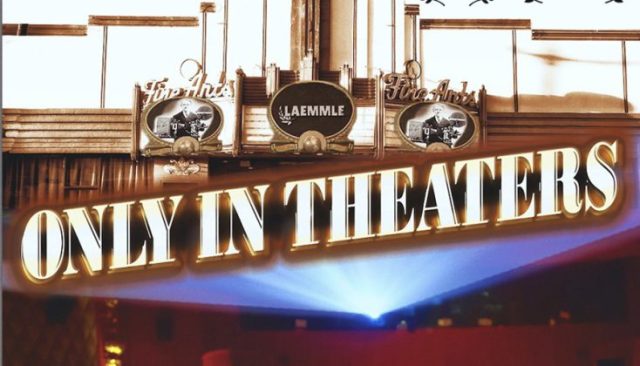 ONLY IN THEATERS, a film by actor/director Raphael Sbarge, is an intimate and moving journey taken with the Laemmle family, spanning nearly three years of challenges, losses, and personal triumphs. 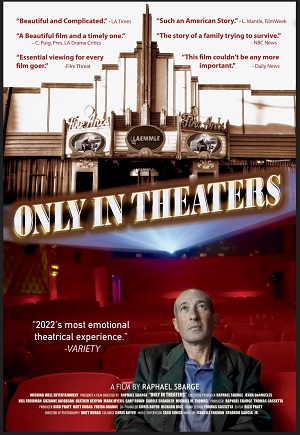 Laemmle Theatres, the beloved 84-year-old arthouse cinema chain in Los Angeles, is facing seismic change and financial pressure. Yet the family behind this multigenerational business – whose sole mission has been to support the art of film – is determined to survive.

In a world of growing conglomeration, the Laemmle circuit of theatres has become even more of an anomaly: a family-owned and operated art house theatre chain.

The Hollywood Times had the opportunity to speak with filmmaker Raphael Sbarge and CEO of Laemmle Theaters, Greg Laemmle. Enjoy the conversation:

Having the opportunity to see this documentary in the theater, instead of on my laptop was a true honor indeed.  Raphael did an amazing job showcasing the struggle of Greg Laemmle and his wife Tish, with the ultimate decision to keep the family business open and especially after what Covid did to the movie theater business…shutting it down completely for months, that no one knew would lead to over more than a year.  Greg had his family support, from his father, his great aunt and children. Watching this documentary film takes each one of us through their struggles, and especially his stress. You can’t help but feel his pain and honestly you can’t take your focus off the screen.  I was on the edge of my seat more often than that of watching a thriller movie.  Having some tissue is a good idea for this film.  I had no idea the involvement of Greg’s family in the business of movie theaters, and being part of Hollywood for over 84 years.  This is a ‘history lesson’ film too!  Please support this amazing theater chain and go see the movie.  I challenge all those that read this to do just that and share this post.  Check out the website to see where the movie is playing and hopefully you live close enough to catch it a Laemmle theater.  Judy Shields, The Hollywood Times

Enjoy these photos provided by Raphael Sbarge from the film and Peter Bennett:

Here is what the media is saying about Only in Theaters

“THE STORY HERE IS BEAUTIFUL AND COMPLICATED, ONE IN WHICH THE TWIN WEIGHTS OF LEGACY AND CALLING BEAR DOWN ON THE NEED TO SURVIVE IN CHANGING TIMES”  – LA TIMES

“ONLY IN THEATERS ISN’T JUST A CELEBRATION OF THE LAEMMLES AND THEIR LOVE OF SHARING CINEMA BUT THE AMERICAN DREAM. AT A TIME WITH MUCH UNCERTAINTY IN THE FILM BUSINESS, THIS FILM COULDN’T BE MORE IMPORTANT”  – LA Daily News

“MORE THAN JUST A MOVIE TO US…IT’S A CELEBRATION OF PEOPLE TO WHOM I THINK WE OWE AN ENORMOUS DEBT LOCALLY. THERE JUST WOULD NOT BE ARTHOUSE CINEMA IN LOS ANGELES WITHOUT THE LAEMMLES.” – KPCC’S FILMWEEK