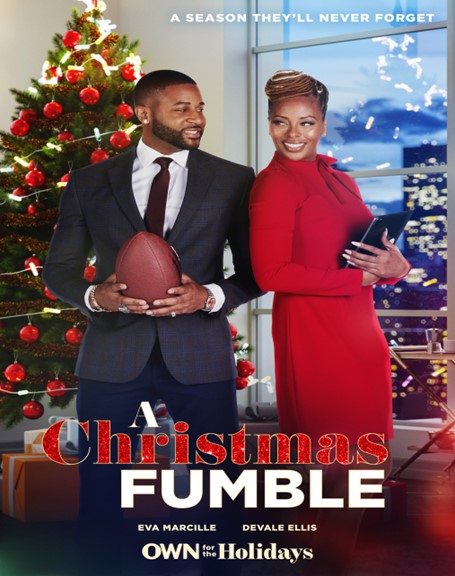 Los Angeles, CA (The Hollywood Times) 12/2/22 – It’s time to gear up for the Christmas festivities and what better way to do so than snuggling up and watching brand-new holiday films? Oprah’s OWN Network will release several seasonal movies, including A Christmas Fumble, starring Eva Marcille and Devale Ellis.

The story follows crisis management queen Nicole Barnes (Eva Marcille) as she is faced with handling a scandal with a former pro football player turned TV commentator Jordan Davies (Devale Ellis). Due to a violation Jordan had back in college, his contract will not be renewed. Nicole must fight to reinstate his image, but in the midst of this, she finds herself with a couple of dilemmas. One is that she and Jordann were once a couple which can prove to be a conflict of interest with the firm that she plans to become a partner of. Two, Jordan has a shallow reporter fiancée who constantly attempts to undermine her as she focuses on cleaning up his image.

Viewers will have to tune in and see if Nicole can pull it together this holiday season. A Christmas Fumble premieres Saturday, December 10 at 9 p.m. ET/PT on OWN Network. Watch the official trailer below:

OFFICIAL TRAILER: A Christmas Fumble | OWN For the Holidays | OWN – YouTube

OWN: Oprah Winfrey Network is the first and only network named for, and inspired by, a single iconic leader. Oprah Winfrey’s heart and creative instincts inform the brand – and the magnetism of the channel. Winfrey provides leadership in programming and attracts superstar talent to join her in primetime, building a global community of like-minded viewers and leading that community to connect on social media and beyond. OWN is a singular destination on cable. Depth with edge. Heart. Star power. Connection. And endless possibilities. OWN is a joint venture between Harpo, Inc., and Discovery Communications. The network debuted on January 1st, 2011, and is available in 85 million homes. The venture also includes the award-winning digital platform Oprah.com.