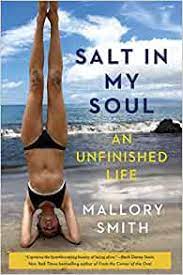 Los Angeles, CA (The Hollywood Times) 1/19/22 – Salt In My Soul is a bestselling posthumously published memoir that takes readers inside the mind of Mallory Smith, a young woman trying to live a full life while dying. With the help of Smith’s family, filmmaker Will Battersby was able to adapt the book into a movie. This docu-style film is a coming-of-age story narrated by Smith, diagnosed with cystic fibrosis at age three. At the age of nine, she realized she would die young, so she began recording her inner thoughts into a diary, which ended up being over 2,500 pages long. Her family recently discovered hundreds of hours of footage and audio recordings, which will be used in the film’s narration. As time progressed, she attended college, becoming a devoted environmentalist. She wrote about her fears, hopes, and depression, giving a voice to millions of people suffering from terminal illnesses.

THT had the opportunity to do a live interview with Will Battersby (Filmmaker) and Diane Shader Smith (Mallory’s Mother). They were able to shed light on the process of turning Mallory’s journey into a film. In speaking with Mallory’s mother, Diane, we were able to get more insight into Mallory’s personality, contribution to the world, and their family, whom she was close with and adored very much. Diane also touched on her advocacy for bioethics and phage therapy. She realizes that being a voice for the voiceless is what her daughter would have wanted.

Salt In My Soul will be released theatrically in New York (Cinema Village) and Los Angeles (Laemmle Royal) on January 21 followed by the VOD release in the US, Canada, UK, Ireland, and key territories worldwide on January 25.

Watch the interview at the link below: