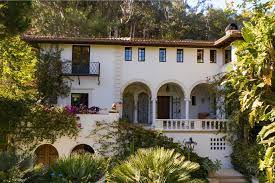 One of Santa Monica’s most historic homes – secluded behind antique iron gates, hand-painted ceilings, and includes a secret speakeasy – is for sale at $50 million. Built-in 1932, Villa Ruchello’s owner, Shane Smith, executive chairman of Vice Media, has poured millions into the mansion to preserve its Old World craftsmanship.

Reminiscent of the best mansions on the French Riviera or Amalfi Coast, Villa Ruchello is nestled behind a three-acre jungle of palm and fruit trees, ferns, and lush gardens. It has been the background setting for Beverly Hills Cop and Entourage and was once the home for several members of Fleetwood Mac.

Structures on Villa Ruchello include the Mediterranean-style mansion with eight bedrooms, two guest houses, and a 74-foot pool and pool house.  The gardens include an orchard of lemon, lime, orange, and avocado trees, herb and vegetables as well as a vineyard. Between two guest homes and the main mansion, there are 12 bedrooms and 13 baths – all together measuring a total of 14,000 square feet of living space. Built during the time of the U.S. ban on alcohol, the main house displays its Spanish/Moroccan design history starting in the open two-story entrance with stairs of Moroccan ceramic tile and white oak. There are formal living and dining rooms with hand-painted beamed ceilings, hand-blown glass chandeliers from Venice, chef’s kitchen, music room, and a master suite with dressing rooms, custom mosaic floors in the bathrooms, a hammam, and private patios. The spacious library holds the house’s secret: behind the books is the onyx-walled speakeasy. There is also a secret staircase that descends to the mansion’s wine cellar.

Located in one of L.A.’s most sought-after locations, Santa Monica is well known for its three-mile coastline and ocean views, Muscle Beach, and the historic Santa Monica Pier that is routinely featured in movies and television. Santa Monica is a hot spot for celebrities, getting them away from the noise and work-a-day world of Los Angeles, but close enough to the studios for convenience.

Currently the most expensive home in the area, Villa Ruchello is listed by Santiago Arana of The Agency, Beverly Hills.