Las Vegas, NY (The Hollywood Times) 1/14/19 – Wandering the Sands Convention Center, on the final day of CES, your reporter noticed a corner booth with a large white, apparently empty, table at the “adok” booth. Thinking the exhibitor was starting the cleanup and take-down process that comes with the end of the show, little notice was taken. Suddenly the table lit up with not one but two over-sized Computer desktop displays. One of the exhibitors walked around the table and started operating the virtual computer just like an ordinary desktop. He was showing someone how you could look at email, Outlook and Contacts from the Windows operating system. He “pressed” an icon projected onto the table and brought up a keyboard and was able to compose an email. Another icon was “pressed”, i.e. a finger was placed on the spot on the table where the icon was projected. That action converted the projected “screen” which allowed the user to hand-write messages using a finger, just like using that function on any touch screen computer.

adok is the startup company that makes the projector system. While originally envisioned as a device to help set up and conduct meetings in any environment with a flat surface, the current iteration of the adok actually includes all the functionality of a desktop with Microsoft Office 360 .

The computer is the small box in front of the folks in the picture.  The projector is the white light near the top. Paul explained that the key to the system was the development of the software and tracking interface which allowed for a extremely small lag between movement of a finger on the table and that movement being converted to the action of an equivalent key on a standard computer. 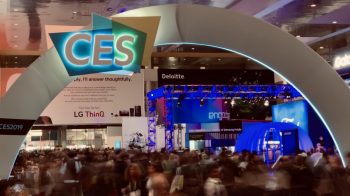 Your reporter noticed that the keyboard did not start with a Q in the upper left hand letter row. Ari explained that the keyboard was a French keyboard and not an English keyboard. adok is a French company looking to open the US market. One will note in the background of the Picture the FRENCH TECH sign. adok was located in a multi row section of the convention floor that was devoted to French companies, both start up and developed. Other sections of the floor had areas devoted to several other countries.