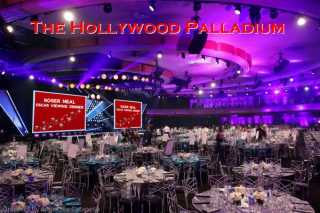 Hollywood, CA (The Hollywood Times) – 02/18/2019 – The 4th Annual Roger Neal’s Oscar Viewing Dinner, Icon Awards & After Party have found a new home at the restored  Hollywood Palladium on Oscar Sunday February 24th. Roger and Lynn Neal, Founder and Chairman of the annual Oscar night event are excited along with their partners Maryanne and Thomas Lai to move into the historic Palladium – which is operated by LIVE NATION.

It’s the first time in over 50 years that an Oscar party has been held there. Neal’s added an After Party that will have Oscar winners and presenters stop by to celebrate their win this Oscar night. For the last three years Roger’s event became so successful at the Hollywood Museum – that it grew beyond the museum’s capacity. The Hollywood Palladium was named a historic-cultural monument in 2016 with unamimous vote by the Los Angeles City Council.

“We are most excited for booking the Palladium and its beautiful restoration. We can seat up to 800 for dinner if needed” said Roger Neal.

ABC7’s TV On The Red Carpet Official Oscar Party Coverage with George Pennacchioand TalkRadio 790 | KABC-AM Sunday Night Live with Susan Olsen & Frank Sheftel will be broadcasting live from the Hollywood Palladium. “We are expecting over 100 stars and a huge media red carpet to accommodate them including Joe Cortese, one of the stars of Golden Globe Best Picture, The Green Book,” said Edward Lozzi, event media and red-carpet coordinator.

The Oscar Viewing Dinner will be a sit-down, black-tie white-glove service experience for the stars, their guests, sponsors and ticket buyers. Souley Vegan owner and Celebrity Gourmet chef Tamearra will be creating the Dinner for Oscar Party guests. Emerald Hare Winery will be among the wineries supplying exceptional wines for dinner and afterwards.

Entertainment will include live on stage: 22-year old R&B Pop sensation/Foundation Records recording artist Roger Neal and his dancers, followed by Richard Halperin’s Hollywood Cavalcade Show with a live band (from LA’s Cicada Club), and special guests performing high-brow music from the 20’s and 30’s. A special appearance by Howard Hewett of Shalamar will rock the Palladium performing at the After-Party and a celebrity DJ will also heat up the dance floor!

Neal says, “The 4th Annual Oscar Viewing Dinner, Gifting Suite and After-Party will be our biggest yet and we are looking forward to a spectacular night on February 24th 2019.”

The Roger Neal Oscar Viewing Dinner and After-Party is by invitation only. You may purchase limited available Dinner Seats including After-Party for $1,000. To buy tickets and/or sponsorship packages, please call: 323-366-2796.

You Matter – You Are Not Alone staff are volunteering to work for the event.