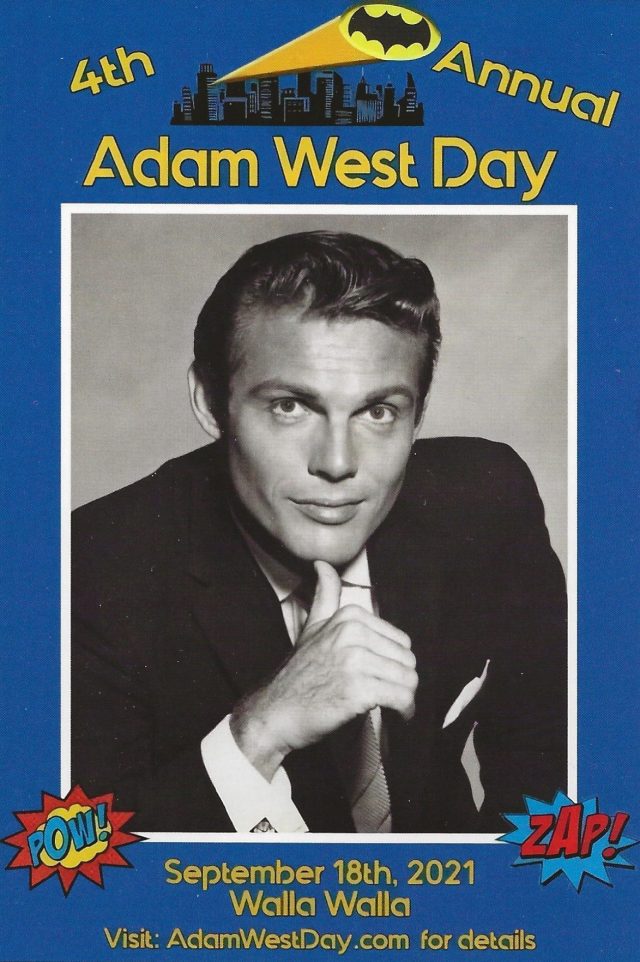 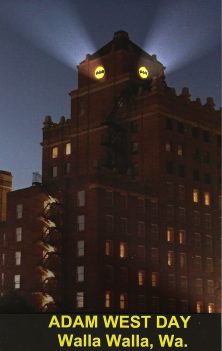 It was a fantastic reunion of the fans of #AdamWest.  The first since 2019, before #COVID19 hit.  It was great seeing all the fans, including #RubenProcopio, #JohnnyGreen, now 80 years old and still going strong, #JonathanGrant the organizer of the event from the #MarcusWhitmanHotelandConferenceCenter, the #Batmobile (Owned by #ClintYoung), the #Batcycle (handmade by a fan here in Seattle, WA) and all the great people who love Adam.

Here’s a clearer image of the entrance to the #Batcave in #GriffithPark.

To all of Adam’s fans – On #MemorialDay weekend 2021 from his family they shared this photo of Adam. He was a military veteran, drafted into the Army in the early 1950’s. He helped create the Army’s first television stations – first in San Luis Obispo, CA and then in Ft. Monmouth, NJ. He cared deeply about his fellow veterans and fallen heroes who we are honoring today. In Adam’s honor, we’re auctioning off one of his Tweets and donating 100% of proceeds to #GarySiniseFoundation and #WoundedWarriorProject.

Fun fact about Adam….. he was incredibly curious and well-informed about technology and innovation and he followed crypto currency from the day it launched. We will be releasing more fun photos from the archive and digital collectibles soon so stay tuned! Thank you for continuing to follow his page. We read all of your comments and appreciate all of the love you show for Adam. He was our hero too. – Best wishes, The West Family

Video: Question asked: What was your fondest memory of your father? Nina (Anderson) Tooley, Adam’s daughter
Video Interview with Johnny Green (from Johnny Green and the Greenmen), 80 years old, who first appeared in the Batman episode: “Surf’s Up!”
Written Interview with Perrin and Nina, Adam’s adult children
Coming soon!

About the Adam West Statue to be placed in Menlo Park, Walla Walla, WA

Advertisement
We have been working on this project for quite some time in order to find the right sculptor, design, placement, approval from our city and of course approval from the family of Adam West. We are so excited to announce that everything is now in place and we are finally ready to begin fundraising for this well deserved honor! To honor our one and only Bright Knight!
Our sculptor is animator, comic book artist and sculptor #RubenProcopio. Long affiliated with #WaltDisney Feature Animation as an animation artist and sculptor, Rubén was instrumental in reviving the maquette process at Disney Feature Animation film production in the 1980s. He is the founder of #MaskedAvengerStudios, whose clients include #WarnerBrosAnimation, #NewLineCinema, #CartoonNetwork, #ElectricTiki, #Enesco and #DCComics. He is known for his versatility and dynamic style in sculpting and drawing. Ruben even sculpted a bust of Adam West, through #MaskedAvengerStudios.
Here is a great interview done some years back with Ruben and showing photos of Ruben and Adam together. https://13thdimension.com/batman-66-artist-ruben-procopio-adam-wests-michelangelo/
The placement will be Menlo Park just off of Alvarado Terrace in Walla Walla. This is the perfect park for Adam’s statue because it is just down the street from where Adam went to school as a little boy (Green Park) and only one block away from the house where a young Billy Anderson (Adam West) lived. Alvarado Terrace is now also known as ADAM WEST WAY where his name was added to the street to honor him in 2017 after his passing.
Gallery of images