Irvine, California (The Hollywood Times) 7/26/2019 – “What do you consider more exciting? A photo of a sky diver floating in time and space or the ability to feel the exhilaration and adrenaline rush of actually hurling yourself from the plane and falling into the great abyss?  4DX gives you just that adrenaline rush…by bringing a movie to life with a host of sensory effects like moving seats that turns the movie viewer into plot participant!” Lance of Idyllwild told The Hollywood Times after experiencing Lion King in 4DX.

I had the opportunity to watch the Lion King last Thursday in RPX and thought now that was worth the extra price of admission. Well, now after seeing it in 4DX at the Edwards Regal Theater at the Irvine Spectrum, I can’t imagine watching these animated movies, redone in live action, any other way or any action packed movie for that matter.

What an amazing sensation to have been able to watch my favorite Disney movie sitting in those amazing 4DX seats. Lance said it all.  It transformed me from theatre seat to The Pride Lands where you run with the wildlife, feel the breeze in your hair, the rain on your face and the thunder in your ears and lightning in your eyes.  Now this is the way to experience an action packed movie!

Seat motion, wind, rain, lights, scents, audio techniques and 3D video all combine to give you a movie experience like no other…and is well worth the investment for movie magic you will never forget.”

Check out their website to get your 4DX movie tickets so you can see for yourself this fascinating moving watching experience: https://www.regmovies.com/theatres/regal-edwards-irvine-spectrum-screenx-imax-rpx-vip/1010#/buy-tickets-by-cinema?in-cinema=1010&at=2019-07-26&view-mode=list

Regal and CJ 4DPLEX announced their latest 4DX location in the U.S. which is now open at Regal Edwards Irvine Spectrum ScreenX, 4DX, IMAX, RPX & VIP. This marks Regal’s fourth 4DX theatre located in California. This expansion is part of a larger deal with Cineworld Group, parent company of Regal, to bring the total number of 4DX U.S. locations in the coming years to 85 with currently more than 600 locations worldwide. Spider-Man: Far From Home was the first movie shown at Irvine Spectrum’s 4DX screen. Currnetly showing is Disney’s Live-action Movie Lion King.

CJ 4DPLEX’s 4DX immersive theatre technology enhances the on-screen visuals of action-packed blockbusters, transcending the traditional cinema experience through special effects including motion-synchronized seats, wind, fog, rain, lightning, snow, bubble, vibration, and scents. The result is one of the most immersive cinema formats in the industry, drawing fans into the action on the big screen.

“Regal is thrilled to continue our expansion of the 4DX experience for our California moviegoers,” said Richard Grover, Regal’s vice president of communications. “This immersive format creates an unforgettable cinematic experience for our guests. We’re continuing our commitment to offer top-of-the-line technologies and amenities in our theatres as we strive to make Regal the best place to watch a movie.” 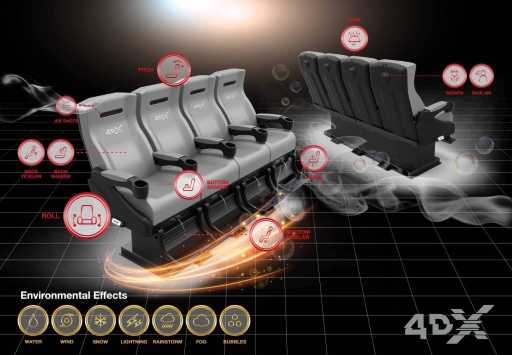 Located at 500 Spectrum Center Drive, movie fans at Regal Irvine Spectrum can join the Regal Crown Club, the industry’s leading loyalty program, to accumulate credits at the box office and concession stand to earn rewards including free popcorn, soft drinks, movies and merchandise. Guests are also encouraged to like Regal’s Facebook page and download the Regal mobile app. Through the app, moviegoers can program their favorite theatres and purchase tickets for their favorite films, all from their phones. Free membership is available online at www.myregal.com.

The Hollywood Times spoke to a few people about their 4DX experience:

THT: What did you like about this 4DX experience?

Anais: It was my first time and I felt like we were there. I really liked the 3D and when the water hit you and that the seats move.

THT: Did you think the seats moved too much?

Anais: It was cool and I really like it and would recommend it to my family and friends.

THT: Did you think it was worth the price of admission?

Anais: I don’t know what that was (laughter). Dad named Robert bought the tickets.

He told me that is was well worth the price and this was his second movies. He saw Spiderman. He liked the movement of the seats.

Their children were so excited and I asked the parents if it would be okay to speak with their children and they agreed!

Daughter-little girl: I like it and like the seats. I like when they were fighting and it like when it lift you up. I liked the water. I want to see movies in the seats.

The little girl liked tiger and she was laughing.

The little boy liked the tiger Simba and the Pumbaa.

THT: Was this first time you experienced a 4DX movies?

Kurt: Yes this was the first time I experienced. The beginning title sequence I felt they need to recalibrate it, it was a little off, the timing. But after the title sequence everything else was on que and you felt so immersed and it felt like being in the VR simulation without the head gear on you.

THT: How did you feel about the water?

Kurt: The mist was good, but I wasn’t getting the effects, maybe I was too far back, like the waterfall scene. I didn’t get any of the water from the ending. Maybe I wasn’t sitting in the right spot.

THT: Did you feel like it was worth the price of admission?

Kurt: I would do it all over again and will be telling my friends to go and do and especially for the Lion King, it was the perfect immersive mist for that movie.

THT: So what did you think?

THT: What would you tell your friends about it?

Serina: Definitely go and see a 4DX movie, it is a really cool experience. It is like a ride, like a 2-hour ride (laughter).

THT: That is a great way to describe it indeed!

THT: Did you think that it moved too much?

Serina: Be careful with your popcorn, I feel if you are going to see a 4DX movie, choose it carefully and be prepared Not to have your standard movie experience. Because if you are there to just experience a relaxing type of movie, it is not going to work out for you!

Regal, a subsidiary of the Cineworld Group, operates one of the largest and most geographically diverse theatre circuits in the United States, consisting of 7,211 screens in 549 theatres in 42 states along with the District of Columbia and Guam as of June 31, 2019. We believe that the size, reach and quality of the company’s theatre circuit provides its patrons with a convenient and enjoyable moviegoing experience. We are committed to being “The Best Place to Watch a Movie!” Additional information is available on Regal’s website: www.REGmovies.com.