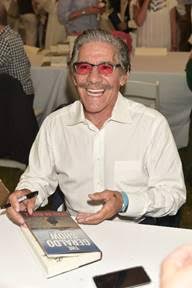 Geraldo Rivera, author of The Geraldo Show: A Memoir, was a featured author at the East Hampton Library 14th Annual Authors Nightat 555 Montauk Highway in Amagansett, NY. The media veteran was among a distinguished group of authors participating in the premiere literary event of the Hamptons summer season. Director Dennis Fabiszak of East Hampton Library and honorary founding chairman and author Alec Baldwin welcomed 2,000 guests for the exclusive book signing and authors’ reception plus cocktail party under the festive grand tent at the new event location for 2018.

The Geraldo Show: A Memoir is written by journalist and media personality, Geraldo Rivera, and published by BenBella Books.  The eye-opening autobiography unpacks, for readers, his award-winning, emotionally charged and controversial 48-years in the news business. The man behind the media personality tells the heartfelt stories of his far-flung adventures in war and peace, his triumphant 15-year marriage to wife and partner Erica, and his wild bunch of family and eclectic friends who range from comic Cheech Marin to Donald J. Trump, the current President of the United States.

Book lovers met Geraldo Rivera to purchase signed copies of The Geraldo Show: A Memoir at the authors book signing plus cocktail reception. All proceeds were donated to the East Hampton Library which raised a record breaking $400,000 in support of essential community programs and services. While enjoying delicious hors d’oeuvres and fine wines, guests perused recent titles and mingled with popular authors. Following the lively cocktail reception, 24 hospitable authors welcomed 600 guests to lavish dinner parties, with one or more guest authors, at their lovely homes across the Hamptons.

Recognized as one of broadcasting’s most enduring figures, and most recently for his delightful participation in Dancing With The Stars (DWTS) season 22, and as a previous finalist on Donald Trump’s reality business show The Apprentice: Celebrity Edition, Geraldo Rivera is still best known as the legendary reporter for WABC-TV in New York who presented a series exposing the deplorable conditions at the Willowbrook State School for the mentally ill. These award-winning reports led to a government investigation and the institution was eventually shut down.

Throughout his career as a reporter, host and correspondent, Rivera has received more than 170 awards for journalism, including the prestigious George Foster Peabody Award, three national and seven local Emmys, two Columbia-Dupont and two additional Scripps Howard Journalism Awards. He is also the winner of the 2000 Robert F. Kennedy journalism award (his third) for his NBC News documentary Women In Prison and has received the Scripps Howard Foundation national journalism award for Back to Bedlam.

In addition to his extensive broadcasting career at home in the US, Rivera is a veteran foreign correspondent who has been on the frontlines in virtually every international conflict since 1973. He has great expertise in South Asia, South and Central America, Africa and the Middle East, covering the international drug wars of tribal territories in both Pakistan and Afghanistan. His vast experience covering conflicts has spanned the violent coup in Chile and the Yom Kippur War to the civil wars in Guatemala, the Philippines and Nicaragua as well as the ethnic conflicts in Lebanon (1980-1983) and Kosovo (1998-1999). In 2000, he went to Colombia to cover the country’s civil war and has covered the fighting from the front lines in Afghanistan, Iraq, Libya and Lebanon on scores of assignments.

Rivera is a graduate of the University of Arizona and Brooklyn Law School and is the author of seven books, including acclaimed His Panic: Why Americans Fear Hispanics in The U.S. and best-selling autobiography Exposing Myself. His war memoir, Geraldo of Arabia, From Tora Bora to Trump will be published later this year. He is married to the former Erica Levy and has five children, the youngest of whom Sol Liliana turns eleven this year.

The Geraldo Show: A Memoir by BenBella Books is available at Geraldo.com, Barnes & Nobles, Amazon and Google Books, Audible.

The book will also be available in paperback January 2019.

The East Hampton Library was founded in 1897 after being granted a charter by New York State. Mary Lorenzo Woodhouse donated the land where the library is now located, at 159 Main Street in East Hampton, New York. The library has successfully met the information, knowledge, and reading needs of Long Island’s residents, over the years, and also maintain the prestigious Long Island Collection for historical research. The East Hampton Library, under the direction of Dennis Fabiszak, remains at the center of cultural life and a venue for hosting educational and entertaining programs for residents.

Beginning in 2005 with a handful of dinners and a few hundred attendees, Authors Night has grown to be the premier literary event of the Hamptons with 100 authors and more than 2,500 people in attendance. It’s a celebration of books and 121 years of reading at the East Hamptons Library.