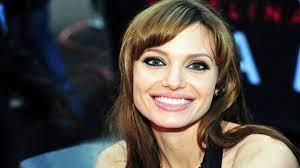 Los Angeles, CA (The Hollywood Times) 1/3/22 – From the Academy Awards to being involved in international humanitarian charity projects, especially those concerning refugees, Angelina Jolie is an inspiration to many. At the beginning of her career, she splashed onto the Hollywood scene in the gritty, no-holds-barred movie Girl, Interrupted (1999), and her fame rose from there.

Born Angelina Jolie Voight in Los Angeles, California, Jolie was immersed in the acting craft because her parents, Jon Voight and Marcheline Bertrand, were both in the biz. At the tender age of 11, Jolie began studying at the Lee Strasberg Theatre Institute, and by 16, she was modeling and appearing in music videos.

Here are 40 interesting facts that you might not know about Angelina Jolie:

1) Jolie’s heritage on her father’s side is Slovak and German, and Dutch, Polish, French-Canadian, and remote Huron on her mother’s side.

2) In 2000, Jolie was named one of People magazine’s 50 Most Beautiful People in the World.

3) Jolie has the letter “H” tattooed on the inside of her left wrist, which is a nod to her brother, James Haven.

4) She is the niece of Chip Taylor.

5) Jolie has a tattoo of the Tennessee Williams quote, “A prayer for the wild at heart, kept in cages” on her left forearm.

6) Other tattoos include two pointy black American Indian symbols, the Japanese sign for death, a large black cross, and a dragon.

7) When Jolie married Jonny Lee Miller, she wore a white blouse and black leather pants.  On the blouse, she painted her hubby’s name across the back in her own blood.

9) She has a strong interest in mortuary science, and dreamed of becoming a funeral director.

10) Jolie was named the world’s sexiest woman in the Swedish magazine Cafe.

12) Another tattoo across her stomach says, “Quod me nutrit me destruit,” which translates into “What nourishes me also destroys me.”

13) In August of 2001, Jolie was appointed Goodwill Ambassador for the United Nations High Commissioner for Refugees in Geneva, Switzerland after her visits to Sierra Leone, Tanzania, and Pakistan.

15) She was voted the 3rd Sexiest Female Movie Star in the Australian Empire magazine in September of 2002.

16) As a goodwill ambassador, in 2002, Jolie visited Tham Hin refugee camp in Thailand to check on the conditions of 9,000 refugees from bordering Myanmar.

17) When Blockbuster Inc. polled 31,969 men in November of 2003, asking who they would most like to date on New Year’s Eve, Jolie was picked for the top spot.

18) Named “The Sexiest Woman Alive” by the Swedish evening newspaper “Aftonbladet” in 2003.

19) “King of the Hill” is one of her favorite television shows, followed by Animal Planet and The Game Show Network.

22) Jolie delivered all of her biological children through scheduled C-sections.

23) She was two months pregnant with twins Vivienne and Knox while finishing up the film Changeling.

25) When her twins were 8 months old, Jolie returned to work and began filming Salt.

26) The New York Times published an article that Jolie wrote as an Op/Ed titled, “My Medical Choice,” on May 14, 2013, in which she revealed that she had undergone a double mastectomy and breast reconstruction because she is a carrier of the breast cancer gene, BRCA1. Her mother died at 56 of breast cancer, and her doctors told her that she had an 87% risk factor of developing breast cancer, so she elected to have surgery to prevent breast cancer.

28) She also had her ovaries removed because ovarian cancer runs in her family.

29) Jolie is one of 15 Oscar-winning actresses that was born in California.

31) Jolie breastfed Shiloh, Knox, and Vivienne until they were 10 weeks old.

32) When she developed Bell’s Palsy and hypertension in 2015, she was cured with acupuncture.

33) To prepare for her role in Sky Captain and the World of Tomorrow (2004), Jolie met with and interviewed several British World War II veterans and aviators. Afterward, she modified the screenplay by adding the slang that was used during that period.

34) She was born Angelina Jolie Voight, but she dropped the surname in 2002 and began using her middle name, which means “pretty” in French.

35) Jolie had a live-in boyfriend at age 14, whose name was a mystery until he was finally identified in 2014 as Anton Schneider.

36) Naturally, Jolie is a blonde. She dyes her hair dark.

37) She greatly admires Johnny Depp, with whom she worked on The Tourist.

38) Jolie saves one-third of her money, lives on one-third, and donates one-third.

40) Voted by Britain’s Channel 4 in first place in a poll to find the 100 Greatest Sex Symbols in 2009. Elvis Presley was runner-up.