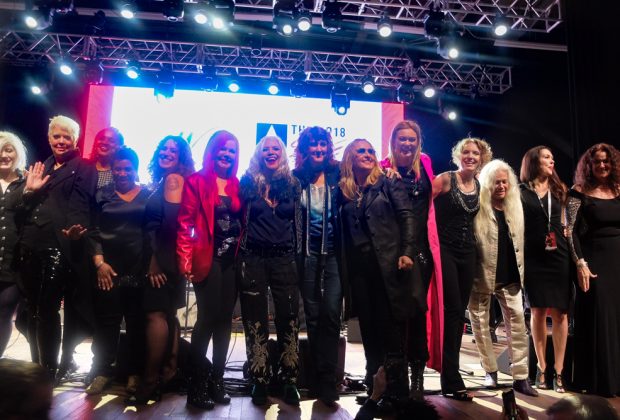 Anaheim, CA (The Hollywood Times) 2/20/18 – The 6th annual She Rocks Awards had a focus and intensity this year that was undeniable. The #MeToo and #TimesUp movements have gone global, and have thus empowered women to stand up and demand to be acknowledged for their current and past accomplishments.  Additionally, these cultural movements are shining a light on injustices and making perpetrators accountable for their actions.  It was in this rich environment that the event took place.

Laura B. Whitmore, one of the evening’s hosts and founder of WIMN, opened the evening by speaking about the mission and the message of the organization. She said, “I feel like we are finally being heard. We must continue to build on the progress that we have made as we advocate, educate and inspire women in the music industry”.

The She Rocks Awards were hosted by WIMN, The Women’s International Music Network, to honor women in all areas of the music industry who stand out as leaders and role models, and who have made a notable artistic contribution.  This year, the notable and impressive honorees spanned generations and genres, and evolved from following the trends of the time to setting them.  Kat Corbett, DJ and host of the midday show on KCRW, co-hosted the event along with Laura B. Whitmore.

Sarah Longfield opened the evening’s musical events with her solo guitar performance over prerecorded soundscapes. With a clean and smooth tone reminiscent of Eric Johnson, her impassioned and innovative guitar playing set the stage for the night’s recipients.   Fanny, the first all female rock band to record a full- length LP with a major record label, received the Inspired Award. Fanny has had several members over the years including June and Jean Millington, Brie Howard, Patti Quatro and Alice De Buhr. They received long overdue recognition for their musical and trailblazing contributions as women and artists. They took this opportunity to announce their new CD release “Fanny Walked The Earth”. After moving to California in 1961 the Filipino-born sisters June and Jean Millington took refuge in their music. They found some other female musicians, joined forces and formed the first incarnation of their band.  Unprecedented in rock and roll, Fanny lit the torch and led the way for other female bands and artists to go down a similar rocking path. Undeterred by the lack of recognition for their musicianship and artistry, Fanny forged ahead leaving a trail of exceptional music in their wake. With strong heart, spirit and a good sense of humor, Fanny graciously accepted their award.

Shirley Manson of Garbage gave a heartfelt and impassioned speech to present an award to one of her heroes: Exene, lead singer from the Los Angeles punk band X. She reminded the audience that X had such a profound influence on the American music scene that the Grammy Museum had dedicated an entire exhibition to their career. Exene, who inspires women and men all over the world with her authentic and unabashed performances, received the Dreaming Out Loud Award. She was also part of the alt-country movement, as well as a spoken word artist. She has released two books, and her art is exhibited in galleries and museum in the US and Europe. When Exene took the stage to receive her award, there was a certain reverence that came over the audience. She shared stories of her childhood dream to be a pitcher for the Chicago White Sox (which, in a 2017 ceremonial first pitch at Dodger Stadium when the Sox were in town, she was able to realize). She spoke eloquently about the challenges of being a female artist, telling the hushed crowd that it is “all right to put yourself first and reach for your dreams”.  The artist Alyeska then performed her rendition of X’s song Breathless. Alyeska succeeded in bringing her unique styling’s to the classic X song with her blend of delicate and haunting vocals mixed with her noisy and overdriven electric guitar.

After a brief roast and some funny and heartwarming stories from her wife Linda, Melissa Etheridge was presented with the Icon Award. Her acceptance speech focused on the struggles women including herself have had to overcome in rock and roll to establish themselves. She turned the attention from herself to acknowledge females in all areas of the music business that have been kicking the doors down and making names for themselves. Her grace and kickass attitude displayed all the reasons why she has come to be regarded as an icon.

Katie Pierson and Cindy Wilson from the classic barrier-busting B52’s were still as funny and quirky as ever.  The women took home the Vanguard Award.  The group originally took their southern US origins, the punk aesthetic and a profound love of all things kitsch to come up with a completely unique sound and look.  They toured around the world with hits like “Rock Lobster” and the later single “Love Shack”: a cursory Youtube check will reveal not just the ladies’ bizarre harmonies but also Kate Pierson’s instantly recognizable foundation of key bass and organ for their first years on the road – she also played bass on some songs. If one didn’t know them from the B52’s they might have mistaken them for a longtime comedic duo.  The energy of the two singers and friends elicited love and admiration from the audience.

Sadly, Pat Benatar was waylaid by this year’s flu, and could not attend at the last minute.  Despite her absence, she was presented the “Legend” Award.

There were some important women who take on a more behind-the-scenes role that were also feted at the event.  Amberley Crouse-Knox won the Excellence Award for her role as the Senior Director of Creative and Business Development at BMG Music Production. Kristy Porter won the Powerhouse Award, having worked her way up as a top sales person at Guitar Center to Category manager and then to Director.  Karla Redding-Andrews, daughter of the late great Otis Redding, won the Champion Award.  She is the Executive Director for the Otis Redding foundation, which helps to provide music education for young people between the ages of 12 and 17. Her program also provides afterschool and weekend music lessons as well as the annual Otis Music Camp. Karla also sits on a number of other music boards.   Fabi Reyna took home The Vision Award.  Fabi is a Mexican-born Texas-bred guitarist, who is also the founder of the She Shreds Magazine, the first and only print publication dedicated to women guitarists and bassists.

Candace Stewart, a beloved music biz veteran, took home the Spirit Award. Over the years, she has managed some of LA’s top studios working with music legend from the Rolling Stones to Snoop Dog and so many more. Her commitment to staying on top of the ever-changing waves of technology and political landscape in the business has made her one of the shining stars in the music industry.  She currently manages EastWest Studios. She is an inspiration to everyone she works with.  Dawn Birr won the Mad Skills Award. Starting as a receptionist right out of college, her diligence and love of learning propelled her through the ranks of many areas in the business. She has been product manager as well as VP of Sales to name but a few of her titles. She completed her MBA in 2006 and is currently Channel Manager for the Americas for Sennheiser Business Solutions and is a board member for The Women’s International Music Network as well a member of soundgirls.org. Marketing strategist for M-Audio/Avid and Harman Vanessa Mering received the Achiever Award. She was honored for being a leader in her field as well as her accomplishments in launching new products and planning campaigns.

The house band, Rock Sugah, was comprised of a prominent seasoned musicians: bandleader Divinity Roxx on bass (Beyonce, Patti LaBelle, Erykah Badu), Kat Dyson on guitar (Prince, Cyndi Lauper, Mick Jagger), Benita Lewis on drums (Lalah Hathaway, The Dramatics), and Drin on keys (Natalia Jimenez).  These ladies rocked the awards and kept the evening moving along. The musicians, each sporting an impressive list of credentials, came together and created an explosive group in artistry and style. They performed pieces from their own CD as well playing cues to lead people on and off stage. They also backed many of the guest artists including the Command Sisters, who charmed the audience with their exhilarating performance and beautiful harmonies.  They also supported the amazing voice of Olivia Rox.

At the end of the night, these strong and talented women joined their voices in performing the only song that would properly represent the feeling of the evening, the year and of life itself – Otis Redding’s “Respect”, which Aretha Franklin popularized with her searing 1967 version.  The camaraderie of the ladies sharing the microphone, the spontaneity of Kat Dyson giving her orange PRS guitar to Melissa Etheridge, the true and chaotic nature of a real jam, capped by a final bow and frenzied exchange of smiles and phone numbers – it was pure lady-powered rock and roll!

PETERSEN AUTOMOTIVE MUSEUM CELEBRATES THE 90TH ANNIVERSARY OF THE ICONIC 1932 FORD WITH A NEW NATIONAL HOLIDAY, EXHIBIT AND A STAR-STUDDED GALA