San Francisco, CA (The Hollywood Times) 6/6/17 – As the gates were about to open Friday afternoon, you could feel the energy of the crowd waiting to finally experience the very first, and hopefully annual, Colossal Clusterfest in downtown San Francisco.  Two stages on the streets of the Civic Center, as well as three stages inside of the Bill Graham Music Hall, provided plenty of options and forced the audience to make some tough set time decisions.

Presented by Comedy Central and Another Planet Entertainment, this one of a kind festival went about curating a lineup not just of world-class comedians, but also of some upper echelon music acts that get the big slots at even the biggest festivals.  Booking huge comedians for a festival like Jerry Seinfeld, Kevin Hart, Bill Burr, Sarah Silverman, Hannibal Buress, and combining that with hit makers such as Ice Cube, Chromeo, Vince Staples, Les Claypool and Tegan and Sara is a very chancy endeavor that Colossal Clusterfest was able to pull off with great success.

Unlike a normal comedy club or concert, festivals have more pressure to present more than just good entertainment that is listed on the bill.  Colossal Clusterfest achieves exactly that, instantly immersing you in some of the best comedic television shows of our time as soon as you walk through the gates.

You enter immediately into the world of South Park, with large colorful cutouts of pretty much every major character and scene you could think of, with plenty of friendly festival employees there offering to take your picture.

Keep walking and you’ll see some of South Park’s infamous food pop ups, including Casa Bonita, Tweek’s Coffee, and Raisins (a Hooters parody).  But it’s not just South Park that has themed food and areas dedicated to them. 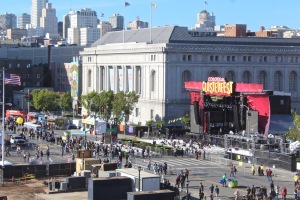 Just beyond South Park was the Seinfeld area, which included a full-scale replica of Jerry’s apartment, naturally with a rather long line all weekend.  Going along with themed food, a replication of Tom’s Restaurant stood close to Jerry’s apartment, and right by that there was, of course, a Soup Nazi stand.

And then, inside of Bill Graham just around the corner from the auditorium, was my personal favorite: a near perfect recreation of Paddy’s Pub from It’s Always Sunny In Philadelphia.  Complete with a gross bathroom (strictly for photo ops of course) and gawky Irish themed decorations, you could stop in there to watch some Sunny bloopers early on, grab a Grilled Charlie (they really make it too) or a Milk Steak with Jellybeans.

What made this spot really special, though, was when acts like Trevor Moore (The Whitest Kids U Know) and Roy Wood Jr. (The Daily Show) would get up on the small stage and do tiny bits of comedy leading into people performing karaoke.  And while I cannot personally attest to this, I later found out that members of the cast showed up to play a game of Flipadelphia (the shows version of flip cup) against some of the attendees.

Aside from some minor issues regarding slight miscommunication between the attendees and the festival (not knowing that you needed reservations for one of the stages until sometime on Saturday, for instance), the festival was very well managed.  Considering the caliber of the acts that were scheduled, everything was pretty much perfectly on time, which made the festival run generally very smoothly.

I overheard some people complaining when they moved everyone out from the ‘Colossal’ stage between every act, but it prevents people from running to the front row at the very beginning and camping out there all day, which can often lead to crowding issues at other festivals.  The staff was all very helpful, and it was quite easy getting around and finding out where everything was simply from reading the map or by using the mobile app.  Every first time show or fest will have its issues, and the minor ones that Clusterfest experienced were insignificant in comparison to how well everything else was ultimately run.

I left the festival Sunday night feeling like I had really experienced something…well…different, and in the best of ways.  Looking to my left in the crowd and seeing acts that I had watched earlier that day and laughing along to Jerry Seinfeld’s jokes was kind of magical in a way that only a festival like this one could bring.

That really was part of what made the weekend so incredible, the realization that even the performers are there not just because they’re getting a paycheck, but because they legitimately love watching comedy and/or music.  The people of San Francisco, and the Bay Area in general, are no strangers to massive festivals taking over the town for a weekend.

For some, the festival and nightlife scene is a big reason why the high rent is worth the price of living in the city.  And it is no secret that events like these are beneficial as they help make quite a bit of money for the city they take place in.

While San Francisco is home to plenty of incredible festivals, I ultimately would love to see Colossal Clusterfest back next year, and hopefully in the years following.  You know I’ll be there!