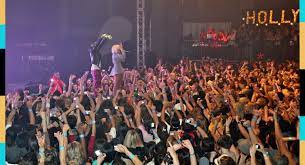 Palm Springs, CA (The Hollywood Times) 10/9/21 – Not only was the desert super-hot in Palm Springs, but so were all the lesbians who attended the 30th Dinah Shore Anniversary Event for four days in the blistering sun (September 30 – October 3, 2021).  Lesbians were everywhere.  The Hilton.  The bars. The Delis.  The street corners.  The sidewalks.  They were twerking, kissing, grinding, talking, dancing, and laughing as they even overtook the men’s bathroom at the Hilton.  The event included DJ’s playing thumping music and beats at pool parties with women in heels and bathing suits dancing on wooden platforms as they were tipped for their flair, good looks, and groovy moves.  Stars such as Macy Gray, Ce Ce Peniston and the Boi Band were some of the performers. It was like any other Hollywood party with glamour, glitz, flings, romances, broken hearts and hickies all filled the lesbian landscape for the weekend. 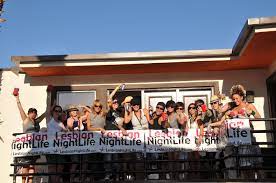 But not everyone was having such a joyous time.  The Latin nation was hard at work cleaning up the garbage left behind from the lesbians.  They were the hotel maids, trash collectors, dish washers, and the servers.  Many partying remained oblivious to those wheeling around the trash cans on a Saturday night as they danced the night away against the beautiful backdrop of mountains and palm trees while the stars ruled the runways, red carpets, and photo shoots.

Why is Dinah thriving when lesbian bars are dying?  We were able to meet the founder, owner and CEO of the Dinah Shore event, Mariah Hanson dressed in a beautiful white linen outfit with a bikini top peaking underneath.  She told us the reason for her success was due to relationships she had cultivated throughout the decades with the LGBTQ community, Palm Springs businesses such as the Hilton, and that she was able to evolve.  Besides lesbians who were everywhere, Corporate America was also ubiquitous.  The Tito’s label was plastered on posters, VIP cabanas, pool beach balls, and the clothes the peddlers wore as Tito’s vodka and lemonade was a favorite among the party goers. 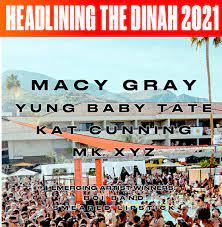 Trans women, trans men, lesbians, and cisgender men all came together at the hottest lesbian party on the planet with every color of the rainbow loud and proud.  Inclusivity is the key according to Dinah’s founder and visionary, Hanson.  She was a visionary living the buzz words before they became unifiers and dividers, labels and groups, categories and constraints.   The lesbian nation is not dead if Dinah is any indication of the future for this often misunderstood group that remained underground just a generation ago.