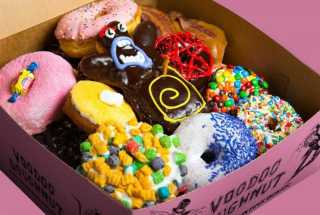 Featuring Award-Winning Voodoo Doughnut, California Donuts
and Astro Doughnuts & Fried Chicken
at Edible Exploration of L.A.’s Favorite Past
LOS ANGELES, CA (The Hollywood Times) May 31, 2019 — The donut is having a renaissance, and Union Station is taking guests into the center of the movement at the 2nd annual DTLA Donut Festival, Saturday, June 8, 10 a.m. – 2 p.m., Union Station South Patio.
Guests can stroll through the “Hole Donut Marketplace”—a dozen donut vendors will showcase the popular pastry in all its many forms: plain, glazed and filled; traditional; and new wave.

The momentously, mouthwatering event will also serve up breakfast burritos, tacos and breakfast sandwiches at The Rooster Truck—from “Chopped” and “Cutthroat Kitchen” winner Rouha Sadighi. Guests can wash down the ultimate donut experience at Macchiato who will be serving coffee, tea and boba or at a mobile espresso bar from Mobar & Co offering specialty drinks including their signature Honey Lavender Latte! And the station’s own Café Crepe is bringing the bubbly with a mimosa bar.
The Donut Worry Be Happy activities area will feature baking demonstrations from celebrity baker, Jane Soudah, winner of 2016 Food Network “Spring Baking Championship” and author of “Delightful Desserts,” along with donut-themed arts and crafts.
Our first annual Donut Eating Contest, sponsored by Dazzling Donuts, is sure to put even the most-experienced donut aficionados into a food coma while a Find Your Center yoga workshop hosted by Mockingbird Yoga will allow guest to come down from their sugar high during two 30-minute classes for all fitness levels.
Admission is $5. Tickets available on Eventbrite (https://dtladonutfesttickets.eventbrite.com).
Kids 12 and under are free. Tickets are $7 at the festival.
For additional information, visit unionstationla.com.
Go Metro to all events by taking the Red, Purple, Gold or Silver Line directly to Union Station L.A.
Connect with Union Station on Twitter, Facebook and Instagram.