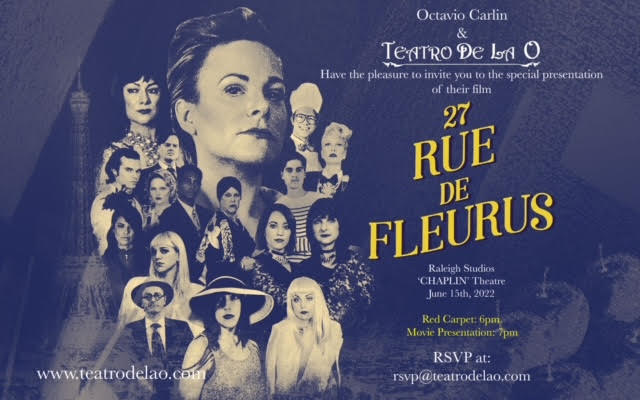 27 Rue de Fleurus. Comedy. Written, produced and directed by Octavio Carlin. From Teatro de la O. and Odette Productions (Black-and-white, 2022, USA, 91 minutes, not rated) Starring Lemon, Dylan George, George Benedict, Genevieve Joy, When Leo Stein left 27 Rue de Fleurus, he and his sister Gertrude (portrayed by Lemon) divided their art collection. The two agreed that Leo would take sixteen Renoirs, and leave with Gertrude the Picassos, most of the Matisses, and the Cezannes, with one exception: Cezanne’s ‘Five Apples’ When Gertrude fought her brother over possession of ‘Five Apples’, Leo’s responded by saying: “The Cezanne apples have a unique importance to me that nothing can replace – I’m afraid you’ll have to look upon the loss of the ‘Five Apples’ as an act of God.” But as the saying goes, ‘out of sight, out of mind’ and with Leo and Cezanne’s ‘Five Apples’ gone, Gertrude forgot about still-life and turned her focus to cubism. …Or did she? Based on true events, 27 Rue de Fleurus is the story of Gertrude Stein’s fight to reclaim Cezanne’s ‘Five Apples’ as imagined by writer, director Octavio Carlin. The action takes place in Paris at 27 Rue de Fleurus, the home of Gertrude Stein and her lifetime companion Alice B. Toklas, during one of her famous Saturday evening soirées. Among those in attendance are F. Scott Fitzgerald (George Benedict), Zelda Fitzgerald (Genevieve Joy) Pablo Picasso, Henri Matisse, and Ernest Hemingway.. On this night, Stein endeavors to enlist her guests’ involvement in the shady business of stealing back the coveted Cezanne.

With locations in Los Angeles and Paris, this is the first film written, produced and directed by Octavio Carlin, internationally recognized fashion designer and winner of the Best Little Black Dress award in Los Angeles. The film’s stars Lemon and Dylan George are accompanied by a cast of actors belonging to the theatrical group of director Octavio Carlin who, with his partner Ricardo Mora, has previously produced a total of five theatrical productions and three short films in Hollywood.

Throughout his career, designer Octavio Carlin has had the opportunity to dress, with his designs, celebrities such as Sharon Stone, Paris Hilton, Roselyn Sanchez, Marilu Henner and Kendall Jenner, among others. Carlin has presented his clothing collections in the United States as part of the prestigious Mercedes Benz Fashion Week as well as in Paris, Busan and, more recently, in Rome, where he now resides.

Completed just prior to pandemic lockdown, 27 Rue de Fleurus is at last going to have its Premiere screening at Raleigh Studios, 5300 Melrose Ave., Hollywood, CA 90038, in its Chaplin