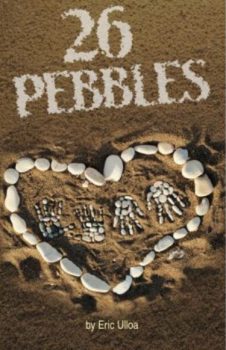 You are asked to be a featured player by wearing a label with your name handwritten on it. Lights come up and one by one we are introduced to various townspeople who try to explain conflicting theories and emotions behind a tragedy. It was one that punctured the sense of security that blanketed Newtown, a quiet and bucolic New England community, and shocked the nation with the second deadliest shooting in U.S. history.

The play takes place six months after the tragic December 14, 2012 massacre at Sandy Hook Elementary School in Newton, Connecticut – which claimed the lives of six adult staff members and 20 children – giving the name 26 in the play’s title. Former student, 20 year-old Adam Lanza fatally shot his mother prior to driving to the school.

Director, Jules Aaron’s choreography is excellent as he places his players around set designer, Jeff G. Rack’s superlative set with artful lighting, sound and projection as the play tries to make sense of another depraved act of mowing down 6 and 7-year-old children. We are reminded of an emotional President Barack Obama – addressing the nation as he dabbed his eyes.

Ulloa has said 26 Pebbles is based on the template of Thornton Wilder’s classic drama Our Town but his desire to keep the structure as Americana infused with folksy charm leaves out the opportunity for an absolutely engaging experience. The play could use more realism and bite to give the needed palpable sting we need to digest and take the journey with Newtown. The playwright chooses to spend almost 15 minutes of sugary exposition, taking place in a town hall setting that has the actors trying to convince us what a wonderful candy lane utopia Newton is – which could be accomplished in under five. Once underway, the action hits high gear when reflections of the shooting begin and the ensuing frantic responses take over and give director Jules Aaron sharply tuned and engaging moments of stagecraft. It’s mesmerizing to behold.

We are never given an answer as to what made Adam Lanza commit such a vile act but are asked to understand and forgive amid personal theories that are summed up by what the character, Rabbi Praver says in the play,

It’s commendable that actor/playwright Eric Ulloa went to Newton and conducted 60 interviews to write this play. The act of 28 victims – Adam and his mother are the other two who died, is a little too easily played off with the common statements that have become America’s answer to anything that is beyond belief to the conscious mind. The “we are love, we are the same” is the same as “Live, Love, Laugh” making a horrific event seem almost trite. Let’s pass out more teddy bears and give each other hugs – the insinuation at times is that if Lanza had been hugged more as an adult or child – he would’ve been a stand-up guy.

He misses the simplicity and direct honesty of what Sidney Lumet’s Network gave us when Peter Finch as character Howard Beale shouts: “I’m as mad as hell and I’m not going to take this anymore!”

It’s a wonderful show and well worth an evening out, to remember. Go see it before it ends.