Inside, the 10,000 VIP ticket holders were treated to art from 70 galleries from 18 countries with a special focus this year on women and non-binary artists. 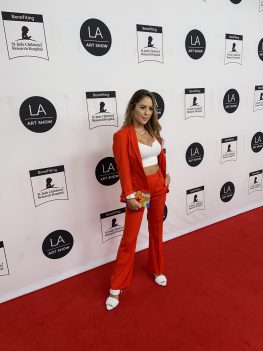 Brittney Palmer https://brittneypalmer.com/ is an American ring girl, fine artist. She is best known for her Topps baseball cards working as an Octagon girl for the UFC, and was awarded Ringcard Girl of the Year for 2012 at the World MMA Awards[4] and again in 2013.

This year has gone into the NFT world both Siff and Palmer offering art for sale with NFT  non-fungible token – a digital token that’s a type of cryptocurrency. An NFT doesn’t mean that you own the piece of art itself. Instead, you’re basically buying metadata that grants you bragging rights.