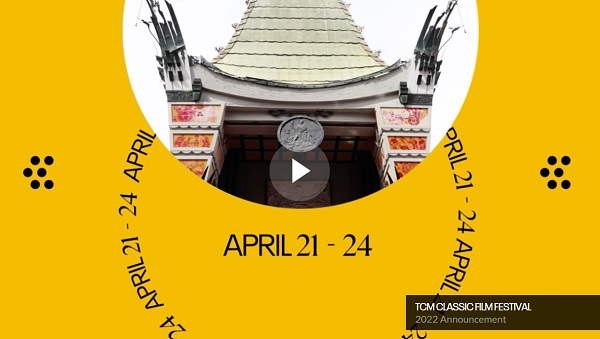 Turner Classic Movies (TCM) will kick off the 13th annual TCM Classic Film Festival on Thursday, April 21st with a 40th anniversary screening of the beloved family sci-fi film E.T. the Extra-Terrestrial, from Universal Pictures and Amblin Entertainment, with Academy Award®-winning director Steven Spielberg in attendance along with Academy Award®-nominated producers Kathleen Kennedy and Frank Marshall. The 2022 TCM Classic Film Festival, held in the heart of Hollywood April 21st-24th, will center around the theme “All Together Now: Back to the Big Screen.”

“I was 15 years old when E.T. came out and what was true then remains so today; the film continues to speak to both children and adults. And it’s fair to say that this is the most influential family film since The Wizard of Oz,” said Ben Mankiewicz, TCM primetime anchor and official host of the TCM Classic Film Festival. “When Steven Spielberg started work on E.T., he didn’t imagine he was making a movie with mass appeal. We don’t get to say this often, but boy was Spielberg wrong.”

“E.T. is the perfect example of a modern classic movie that combines both innovative direction and heartfelt performances,” said Pola Changnon, general manager of TCM. “This film is beloved by millions around the world and we’re honored to have it open our festival.”

At the center of E.T. the Extra-Terrestrial is Elliott, is a young boy who befriends an extra-terrestrial who is accidentally left behind on Earth. As Elliott attempts to help his new friend contact his home planet, so that he might be rescued, they must elude scientists and government agents determined to apprehend the alien for their own purposes…which results in an adventure greater than any of them could have imagined. Premiering on June 11, 1982, the film was a box office hit that became the highest grossing film at the time, beating out Star Wars. The beloved masterpiece was directed by Spielberg and produced by Kennedy and Marshall.

TCM has previously announced iconic actress and comedian Lily Tomlin will be honored with a hand and footprint ceremony in the courtyard of the world-famous TCL Chinese Theatre Imax® in Hollywood. In addition, the third Robert Osborne Award, recognizing an individual who has helped keep the cultural heritage of classic film alive for future generations, will be presented to one of the world’s most respected film critics and historians, Leonard Maltin.

About the 2022 TCM Classic Film Festival

Movie lovers from around the globe will descend upon Hollywood for the 13th edition of the TCM Classic Film Festival. The 2022 festival is set to take place Thursday, April 21 – Sunday, April 24, 2022. Over four packed days and nights, attendees will be treated to an extensive lineup of great movies, appearances by legendary stars and filmmakers, fascinating presentations and panel discussions, special events and more.
Advertisement

TCM Primetime host Ben Mankiewicz will serve as official host of the TCM Classic Film Festival. The festival’s official hotel and central gathering point will be The Hollywood Roosevelt Hotel, which has a longstanding role in movie history and was the site of the first Academy Awards® ceremony. The Hollywood Roosevelt Hotel will also offer special rates for festival attendees. Screenings and events during the festival will be held at the TCL Chinese Theatre IMAX®, the TCL Chinese 6 Theatres, the Hollywood Legion Theater at Post 43, as well as other Hollywood venues. For the latest news and information, follow us on social at #TCMFF.

This year’s theme is “All Together Now: Back to the Big Screen.” In 2022, reunite with fellow fans, the movies, the memories, the stars, and the glamour. It’s all back live and in person, just as it should be and where it all began in Hollywood. From high school reunions to homecomings, TCM will celebrate milestones from the past as we look forward to making new memories together.

About E.T. the Extra-Terrestrial

Journey back to the magic and adventure of “one of the great American films” (Leonard Maltin) with E.T. The Extra-Terrestrial, the beloved masterpiece from Academy Award®-winning director Steven Spielberg. Henry Thomas, Drew Barrymore, and Robert MacNaughton star in the unforgettable story of a lost alien and the 10-year-old boy who helps him find his way home. Digitally remastered for optimal picture and sound, this astounding story is sure to thrill viewers of all ages again with its timeless message of trust, courage, and the overwhelming power of friendship. Available to own on 4K UHD, Blu-ray™, DVD and Digital.