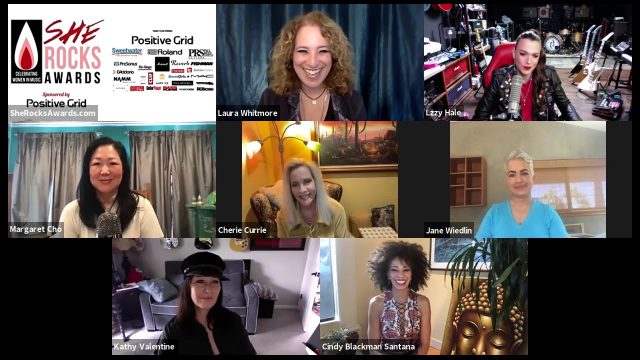 Los Angeles, CA (The Hollywood Times) 1/29/21 – The She Rocks Awards was founded in 2012 by the Women’s International Music Network to honor and bring attention to women’s achievements in all areas of the music business. However, this year was especially and understandably challenging as all interviews and performances were done virtually. That being said, it did not take away from the excitement or musical performances by the artists. Every segment was thoughtfully and professionally executed. Each performer, as well as the production team, brought their best talents to make an excellent and delightful presentation in every way. The awards started on a superb note by signing on a great host – the powerhouse singer, songwriter, and guitarist from the band Halestorm, Lzzy Hale. 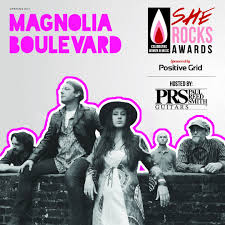 The evening began with a performance from Magnolia Boulevard. The band performed together yet safely distanced, delivering a very soulful and funky Southern-rock-jam-band performance that set the upbeat tone for the evening. Guitarist Gregg Erwin’s unique right-hand technique and soulful slide couple with Maggie Noelle’s vocals and a deeply grooving rhythm section created an organic musical experience. Next up was a duo performance by Lzzy Hale and Halestorm guitarist Joe Hottinger. Lzzy sang and traded rhythm and lead guitar with Joe. The powerhouse duo needed no one else to rock the house!

The first award of the evening was The Groundbreaker Award that went to Cherie Currie, former lead singer of The Runaways. She and her band performed her new single, “Roxy Roller” (which includes guest performances from Suzi Quatro and Nick Gilder). Cherie also is currently involved in several collaborations, including her project Motivator with Brie Howard Darling from the iconic all-female rock band Fanny.

Next, the Dreaming Out Loud Award was given to the incredible Margret Cho. Although mainly known for her stand-up comedy, she is an accomplished actress, fashion designer, author, and singer-songwriter. Often referred to as “The Queen of all Media,” her outspoken style has broken down gender and cultural norms. 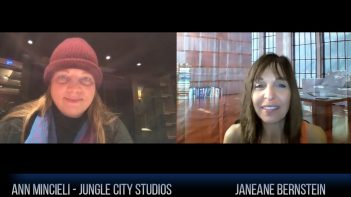 Ann Mincieli received The Mad Skills Award. Mincieli is a New-York-based producer, engineer, mixer, collaborator, and project manager renowned for her work with Alicia Keys. She is the owner of Jungle City Studios that sits in the heart of Manhattan, one of the most elegant and well-equipped recording studios in the world. There, she has worked with many artists seeking her signature touch, including Drake and Jay Z.

Then came The Powerhouse Award to Amy Lee from Evanescence. Always a powerful performer, she sang her new song “Use My Voice” from the latest Evanescence album, THE BITTER TRUTH. She sang a heartfelt and very moving solo version while accompanying herself on the piano.

Moving to the business side of the music industry, the Excellence Award was presented to Sharon Hennessy. Sharon is the owner of The Music People, the manufacturer and home of On-Stage Stands, and a full-line pro-audio distributor. The company was started by her father, who skillfully lured her back into working with and eventually running the family business. The brand is now well-established at retail, with Sharon at the helm. 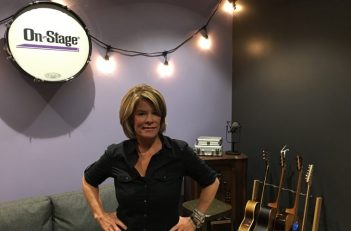 Sharon Hennessy was followed by a BURNING jam featuring some of today’s most prominent players: electric guitarists Jennifer Batten, Yasi Hofer, Courtney Cox, acoustic guitarist Vicki Genfan, as well as bassist Divinity Roxx and drummer Nicki Glaspie, both of whom have anchored the She Rocks house band in years past. Put simply, these ladies killed, with great tones and attitude. On a personal note, I have worked with Jennifer Batten before, and it is so wonderful to see this inspiring player rocking out with younger gifted women who are following in Jennifer’s trailblazing footsteps with their personal stamp.

Right after that, the Inspire Award was presented to the incredible Cindy Blackman Santana, who is the current drummer for Santana. Heavily influenced by the late jazz phenom Tony Williams, she has made her own path as a respected drummer, performing with Lenny Kravitz, Cassandra Wilson, Angela Bofill, Buckethead, Bill Laswell, and so many more across all genres. She rocked the virtual house with a solo drum performance put on by Gretsch Drums.

Gwen Bethel Riley then received the Trailblazer Award. She is the SVP of Music for Peloton Interactive, the largest global interactive fitness platform. Riley is known for her artist-centric approach to identifying opportunities for musical talent in new and emerging technology platforms, digital content, games, consumer products, and feature films. Riley certainly has her finger on the pulse of modern music licensing.

The Vision Award was given to Starr Parodi. Parodi got her start as the keyboardist on the original Arsenio Hall Show and went on to perform with such great as Carole King, amongst others. She is currently an active part of the Los Angeles composing and scoring community, having written for numerous TV shows and films. She gave a very inspirational and supportive speech directed towards female musicians and composers. She is the president of Alliance for Women Film Composers, dedicated to bringing visibility to female composers. Parodi, along with her daughter Isolde Maria Parodi-Fair who sang and played violin, performed their song “Rise.”

The show then proceeded with the Warrior Award, which was presented to Kim Warnick for her work as executive director of her non-profit outfit CALLING ALL CROWS. An activist with her BA in Sociology from Harvard, she works to stop sexual violence at concerts and festivals. #HereForTheMusic campaign started in 2017 to help establish safety for women and girls at all live events, in addition to her work as a cultural activist and community leader. 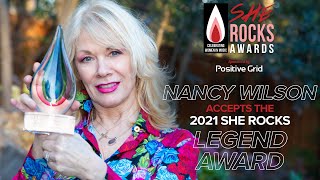 Subsequently, the Legend Award was presented to Nancy Wilson. She is the co-founder, writer, and performer of the multi-platinum rock group Heart, which strung together two decades worth of hits and FM radio staples such as “These Dreams,” “Magic Man,” “Never,” and “Barracuda.” She has a star on the Hollywood Walk of Fame and has built a successful career as a composer for TV and film. In 2020, she recorded her first solo album, which includes nine new compositions, as well as the Bruce Springsteen song “The Rising,” which she and her band performed virtually for the awards.

In a fun bit, a secret Champion Award was presented (or, in this case, hidden) to the very wonderful Laura Clapp Davidson. She’s a singer/songwriter/mom and demo singer who also works for Shure Microphones. By the look on Davidson’s face, the group did a great job of keeping it a secret! Davidson has helped support the She Rock Awards in so many ways over the years, including performing with other artists during the awards, a fun and important role she has always performed with enthusiasm. 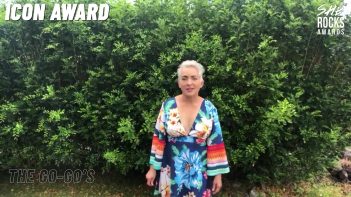 This great exchange was followed by The Icon Award, which went to the Go-Gos. They more than live up to their award – they are the first female band to write and perform their own songs to the top of the Billboard charts. “Club Zero” is their new single, which they performed for the evening’s festivities. The fun, poppy, punk enthusiasm they are known for came through loud and clear. These women are dedicated to rocking with a punk ethos. Although viewers like myself were all listening in our own little spaces, they rocked the virtual house and certainly brought a smile to my face.

The Command Sisters closed the evening with their intimate version of The Go-Go’s classic “We Got the Beat.”

The virtual She Rocks Awards was entertaining, engaging, and inspiring. All parties involved in putting this all together need to be applauded for their production skills, attention to detail, and artistry. Well done!