Miami, Oklahoma (The Hollywood Times) 03/31/2021 – “I do unto others as I’d have done unto me. I conduct my life in that manner (and that includes my career) kind – respectful – giving – caring – honest AND funny without being dirty or swearing…show me and I’ll show you the clever, skillful way the craft is displayed when I’m on stage”. Comedian Sonya White told The Hollywood Times.

Walking through the doors of the iconic Coleman Theater will leave you breathless!  This restored beauty in Miami, Oklahoma transports you back in time to the days of true Hollywood glamour and was the perfect backdrop for the 2021 Sunny Side Up Film Festival!

This year’s festival was “a Hoot and a Neigh” along with all the other “spot on” animal impersonations that came from the extremely funny Sonya White, National Stand Up Comedian, actress, and impressionist, who was the headlining act and host of the SSUFF awards.

Sonya’s brand of comedy is refreshing and wonderful because anyone can enjoy it and not get offended.  Sonya shared that she started in comedy after graduating college and that she “wanted to make people laugh because it made her feel loved and she wanted to travel and see the world”.  Her impressive resume’ includes spots on Comedy Central, CBS, HBO, Last Comic Standing, FOX, CMT, NBC, among many others.  For more information please see www.sonyawhitecomedy.com.

Featured guest and my personal friend and business partner Patty McCall was a “dazzling” addition to the film festival this year.  Her latest book “CaliOkie” about a small-town country girl born and raised in Muskogee, Oklahoma and the secrets of working in Hollywood, was well received by the actors and producers attending the festival this year. 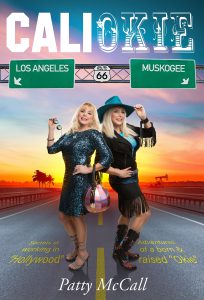 Her music video “U Can 2” performed by Janet Gale took home four awards, including Best and Inspirational music video. The video was produced by P.A.I.N. (Prevent Abuse In Neighborhoods) organization to bring awareness to domestic violence.  Patty also picked up five awards for the western feature film Prospectors the Forgiven on behalf of the team from California.  She also debuted her first screenplay Evil Unmasked at SSUFF, which was written by Carmen Betancourt based on Patty’s first book “Unmasking the Pain Within”. Her screenplay took home awards for 1st Place True Story Based Screenplay and First Time Screenwriter.

For more information or to purchase her latest book “CaliOkie” please see www.pattymccall.com.

Several other amazing award-winning films that were at the forefront of the festival were Vincent’s Vow, Send Me Wings, Amazing Grace, Her Name Was No One, Calf Rope, Javalina Run, and Miracle in the Valley.  Many of these films incredibly were faith-based or dealt with issues faced in society today.  To see the full list of award winners please see sunnysideupfilmfestival.com.

Bobby Cyrus (Billy Ray Cyrus’ cousin) made a guest appearance.  Bobby performed his emotional, award-winning song “Send Me Wings” from the film “Send Me Wings” which won eight wards at the festival.

From the artists to the venues, the 2021 Sunny Side Up Film Festival was definitely an epic experience.  Special thank you to Rock and Brenda Whitehead for putting together another festival full of heart and soul! Another special thank you to the staff at Coleman Theater. 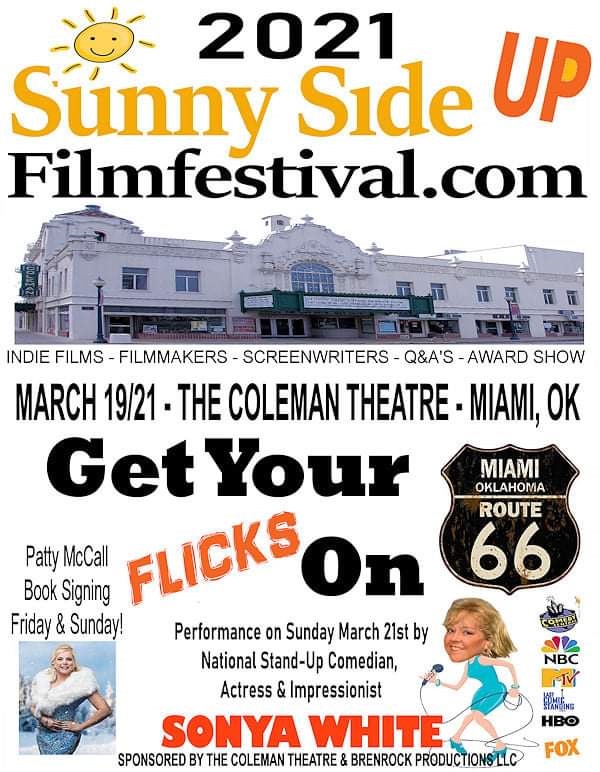 For me personally, it was a wonderful experience to tour the venue and walk in the same spaces once occupied by iconic greats!  In fact, one of the next acts to grace the Coleman Theater will be Winona Judd on April 15, 2021! 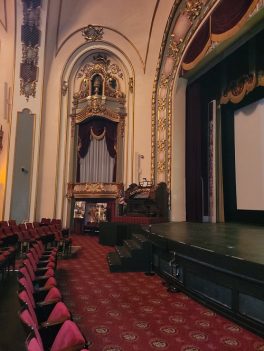 For more information or to book the Coleman Theater please see www.colemantheatre.org.