Los Angeles, CA (The Hollywood Times) 2/20/22 -Saturday afternoon and evening offered two performances of a new show of performance poetry, 20 Years Left, at the Highland Park Historic Ebell Club on Avenue 57 in Northeast Los Angeles. The significance of the title of this new show, 20 Years Left, resides in the fact that the artists involved are mature, seasoned performance poets of a certain age who reckon that they have…20 years left! Twenty years left of living, loving and making art. These are people who have accumulated their own individual histories, who still have goals and desires as they embark on their next, and perhaps final, chapters. They’re still here, will remain here (for another 20 years, at least) and still have a lot to say. The program is produced and directed by Linda Kaye Poetry, which has produced many poetry events in the NELA (North-East Los Angeles) area. I was able to attend this event thanks to Linda Kaye and publicist Phil Sokoloff. The Highland Park Historical Ebell Club was one of the first women’s clubs in Los Angeles and dates back to 1903. 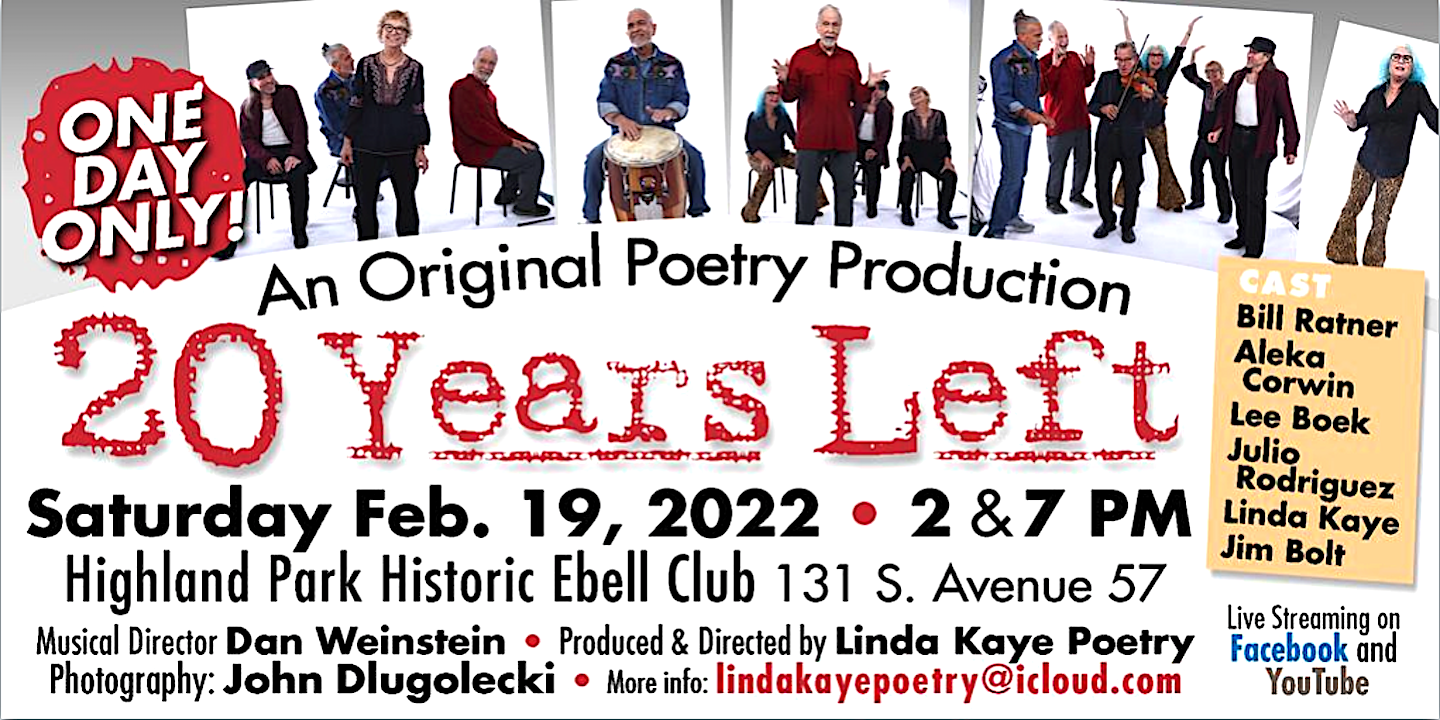 The poets are established members of Los Angeles’ poetry community, and include Bill Ratner (multi-winner at Moth), Julio Rodriguez (The Conga Poet), Aleka Corwin (poet, journalist, artist, mask and puppet maker, set decorator for film and theatre), Lee Boek (Artistic Director of Public Works Improvisational Theatre Company), Jim Bolt (poetry slam winner) and Linda Kaye (poet and producer, featured in The LA Artnews, who also hosts a monthly column, Poets’ Place). Musical direction is by multi-instrumentalist Dan Weinstein. He has played with the greats (Ray Charles, The Jacksons, Aretha Franklin, Al Martino, more) and most likely you have heard him on the soundtracks of some of your favorite movies.

Linda Kaye writes poetry and produces spoken word and art events throughout Los Angeles at many venues where poetry is performed live. Her documentary film, Border Poets, was filmed at the border wall of Tecate, Mexico. Linda hosts a monthly column, “Poet’s Place,” in LA Artnews. You can visit her virtually at http://www.lindakayepoetry.com/  With her green hair, dance moves, and fine voice for song, Linda has a definite stage presence while performing her edgy poems – including the finale of “20 Years Left” – a reminder of what a generation now in their late 60s and 70s represents.

Julio Rodriguez, the Congo Poet, frequently jams with band. He has been writing and performing his poetry since 2009. He has two poetry CD’s and you can see him performing on www.youtube.com/user/congapoet. His poems share a rap vibe naming the cultural signposts and signifiers of what this older generation grew up knowing too well in the turbulent but exciting 60s.

Lee Bock has been a major figure in the Public Works Improvisational Theatre Company in Los Angeles since the 1970s and serves as its Artistic Director. He is a staple of the Silverlake arts community and you can learn more about his work at www.publicworksimprov.com. His poems edging into song are marked by wit and insight.

Jim Bolt comes from a Beatnik tradition of poetry and is easily recognizable as an accomplished actor on television. His poems focused on forgetfulness that comes with aging – played out in character as a man in his garage looking for something, the name of which he seems to have forgotten. Jim\ has performed at the National Poetry Slam. His on-stage sinuous movements match his erudite wordplay. Check out his work at www.RockPoet.com.

Aleka Corwin is a poet, journalist and set designer for film and theatre. She has performed at The Moth Story SLAM and published in The Viral Voices Anthology. She is married to fellow performance poet Bill Ratner and teaches art workshops in Los Angeles. To learn more about Aleka, check out www.alekacorwin.com. Her performed poems were more like anecdotes from life with a domestic connection.

Bill Ratner is one of Hollywood’s top voice actors, as “Flint” in G.I.Joe, Transformer, Family Guy, Robot Chicken, and Community. He is the 9-time winner of The Moth Story SLAM and 2-time winner of the Hollywood Fringe Festival Award for Solo Performances. You can find his published stories and poems in Best Small Fictions 2021 (Sonder Press), Fear of Fish (Alien Buddha Press), and a number of poetry journals. Bill’s readings are often heard on programs aired on National Public Radio. Do you want to know more about Bill’s work? Go to bill.ratner.com.