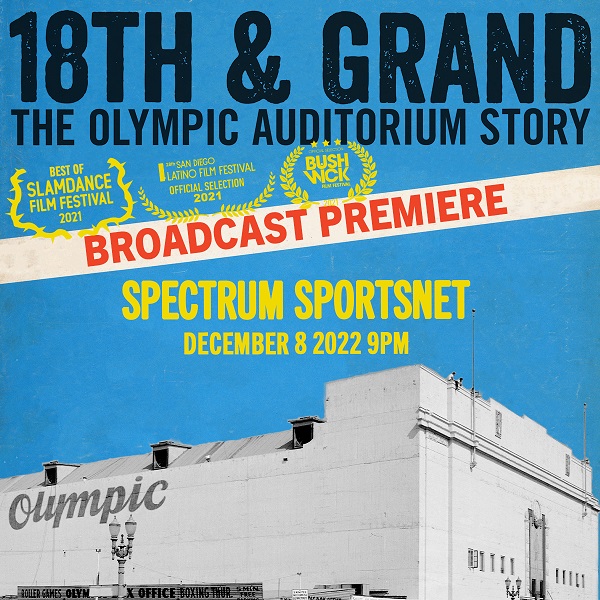 It has been announced that 18th & Grand: The Olympic Auditorium Story, the much-lauded documentary that tells the story of Los Angeles thorough the history of its historic fight arena where boxing, wrestling, roller derby and punk rock held sway for almost a half century, will make its broadcast premiere on Spectrum SportsNet (channel 43 in Los Angeles) on Thursday, December 8.

The documentary, directed by Steve DeBro was the closing film at last year’s Slamdance Film Festival and an official selection for both the San Diego Latino and Bushwick Film Festivals. Special screenings in the region have yielded enthusiastic reactions. Eddie Muller of Turner Classic Movies, wrote, “18th & Grand resurrects wild and wonderful memories of the Olympic Auditorium, once the beating heart of several vital strains of Los Angeles culture – boxing, wrestling, and punk rock – that weren’t dusted with Hollywood glam and glitter.  Looming large is legendary promoter Aileen Eason who showed the world how a ballsy broad can mix it up with the big boys.”

Channel information is available at https://spectrumsportsnet.com/faq.

The film will also air on the Spectrum News channel at various times in the coming months.  Tom Kenny, recurring host of the Lucha VaVoom wrestling and burlesque series who voices the title character in the SpongeBob SquarePants animated series and fronts the popular rock ‘n’ soul band, Tom Kenny & The High-Seas, has long been a booster of the film. He commented, most succinctly, “You’re going to love 18th & Grand; it’s the doc that rocks!”

Featuring the distinctive voices of wrestlers, boxers, musicians and skaters, 18th & Grand captures a disappearing culture that helped shape the city. From the dangerous combat of boxing to the dramatic theatricality of wrestling, roller derby, and music–from rhythm & blues to hardcore punk–the gritty punch palace at the corner of 18th Street and Grand Avenue was the most raucous show in town, drawing movie stars, mobsters, and everyday people who witnessed high stakes competition where numerous careers were made, and gallons of blood was spilled. The Orange County Register noted, “The film captures the mix of guts and glory that made the Olympic, as one voice puts it, ‘a theater of the violent.’” John Doe of seminal LA punk rock band X commented, “It’s very clear that this was a labor of love, and the editing is great.”

For decades, the Olympic was run by Aileen Eaton, an extraordinary woman who was a pioneering show business promoter and star maker who thrived in the male-dominated fight world. Eaton’s remarkable reign forms the backbone of the film; she was a forgotten heroine who left a major mark in sports and popular culture. From Gorgeous George to André the Giant to Muhammad Ali, she promoted the biggest stars and built the careers of world champions from across the city and across the globe, making the Olympic a world-famous destination for decades.

This month the film is available, for the first time, on Blu-ray at www.18thandgrand.com. The Blu-ray version includes complete long-form interviews with Gene LeBell, ring announcer Jimmy Lennon Jr. and the Lennon Family, roller derby star Honey Sanchez and the Sanchez/Valladares family and is closed captioned and translated into Spanish.

The film was set to launch in March 2020 at sold-out premiere at the Cinerama Dome in Hollywood that was cancelled due to the pandemic. Despite that setback, it has been a hit wherever it has screened thereafter, including a sold-out series of shows at Laemmle Theatres in March 2022.  Out of necessity, the Slamdance showing took place at a drive-in.

DeBro and Latino boxing historian/author Gene Aguilera, along with LA Plaza de Cultura’s Karen Crews Hendon and Esperanza Sanchez, are serving as curators of the museum’s forthcoming (August 2023) 18th & Grand: The Olympic Auditorium exhibition. Slated to run until May of 2024, the exhibition recounts the 80-year history (1925-2005) of the Olympic Auditorium, the home for visceral entertainment in Los Angeles with artifacts from all facets of the venue’s storied history.

The Olympic Auditorium was a focal point for Mexican American and Mexican culture in Los Angeles; its ring was a platform for contenders from Southern California and south of the border, prompting fierce rivalries and inspiring intense bonds between athletes and fans. A part of the fabric of LA, the Olympic influenced popular culture through its weekly presence on local television, famous phone number (Richmond 9-5171), and frequent appearances in Hollywood films (Rocky, Raging Bull, Ali) and TV shows (The A-Team, Charlie’s Angels, Starsky and Hutch). This historic venue shaped Los Angeles’ past and influenced its future.

“A great film that highlights not just a place but the whole city.” – Unseen Films

“An enlightening, exciting documentary that creates an indelible image of one of the only female boxing promoters, Aileen Eaton — who transformed Olympic Auditorium into one of the city’s greatest successes.” – Local News Matters Bay Area

“In 18th & Grand writer and director Stephen DeBro explores the city’s history through the lens of a venue that could only exist in Los Angeles.” – Hyperallergic